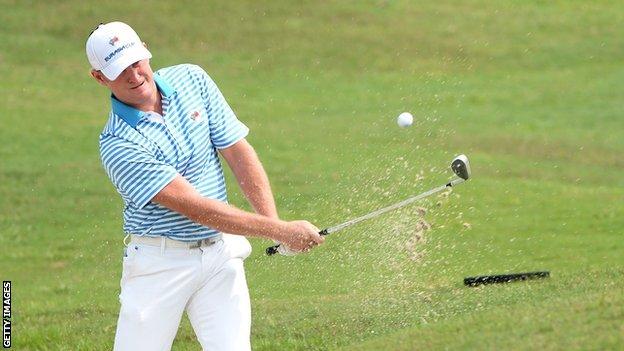 Graeme McDowell and Jamie Donaldson ensured Europe will take a 7-3 lead over Asia into the final day of the EurAsia Cup in Kuala Lumpur.

The pair combined to give Europe their only win in the final match of the five foursomes on day two.

Asia had fought back from their 5-0 whitewash on day one with two wins and two halves in the first four matches.

The Ryder Cup-style event will conclude with 10 singles matches on Saturday, with 10.5 points needed for victory.

Northern Ireland's McDowell and Wales' Donaldson were two down after eight holes, but rallied for a 2&1 win over Gaganjeet Bhullar and Nicholas Fung.

Prayad Marksaeng of Thailand and South Korea's Kim Hyung-sung beat Danish pair Thomas Bjorn and Thorjorn Olesen 4&3 in the first result of the day before Anirban Lahiri and Siddikur Rahman defeated Joost Luiten and Victor Dubuisson by one hole.

Europe captain Miguel Angel Jimenez and fellow Spaniard Pablo Larrazabal had been one down since the 10th but salvaged a half point with a birdie on the 18th to finish all-square against Thai pair Thongchai Jaidee and Kiradech Aphibarnrat.

The Japanese pairing of Koumei Oda and Hideto Tanihara trailed by three after 10 holes but fought back to lead by one with two to play before halving the match against Gonzalo Fernandez-Castano and Stephen Gallacher.

Build-up to the event has been overshadowed by a row between the organising tours and Amen Corner, the family firm of the late Seve Ballesteros responsible for the Royal Trophy, a separate Europe v Asia team competition.