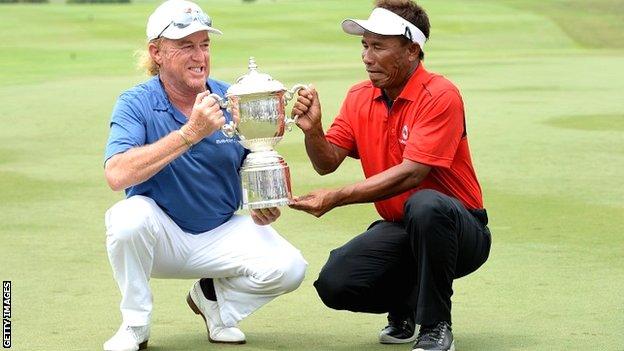 Thongchai Jaidee's team lost the fourballs 5-0 and trailed 7-3 ahead of the 10 single matches, leaving Europe three-and-a-half points from victory.

But after six Asia wins, the contest came down to the match between Gonzalo Fernandez-Castano and Hideto Tanihara.

Fernandez-Castano holed from three feet to par the last and conceded Tanihara's shorter putt to ensure a tie.

Europe captain Miguel Angel Jimenez earned an early point with a birdie on the 18th to beat 23-year-old Malaysian wild card Nicholas Fung, but it was one of only two victories for the Europeans on the final day.

To end on the last, it's fantastic. I have never seen a match like this. It's very close and amazing.

In the final match, Scot Stephen Gallacher lost his ball with a wild tee shot on the 15th to complete a heavy loss against Siddikur Rahman, putting Asia ahead for the first time this week.

However, Joost Luiten, having seen a three-hole lead reduced to one, holed from five feet to par the 18th and beat Japan's Koumei Oda to level the scores.

In the decisive final match out on course, Spaniard Fernandez-Castano missed a two-foot putt on the 15th to fall one down, but levelled with a stunning eagle on the 16th.

Japan's Tanihara saved par from 10 feet on the 17th, and Fernandez-Castano held his nerve on the last before sparing his opponent from having to putt.

"Everyone played really well. I think the match is unbelievable, it was a good finish," Jaidee said.

"To end on the last, and on the 18th hole, it's fantastic. I have never seen a match like this. It's very close and amazing.

"We had a good draw and good pairings, I think that's the key point."

Jimenez, 50, said: "It's been an amazing day of golf, very tough. At the end of the week, the European team did not win the tournament but the Asian team, they played very well. Asia, Europe, they both win, nobody loses."

Welshman Jamie Donaldson, who partnered McDowell to victory in the fourballs and foursomes, saw a four-hole lead at the turn evaporate against Prayad Marksaeng and had to be satisfied with a half point.

"I flushed it for nine holes and then I don't know if the heat got to me a little bit, but I hit some shocking shots and gave him a few holes," he lamented.