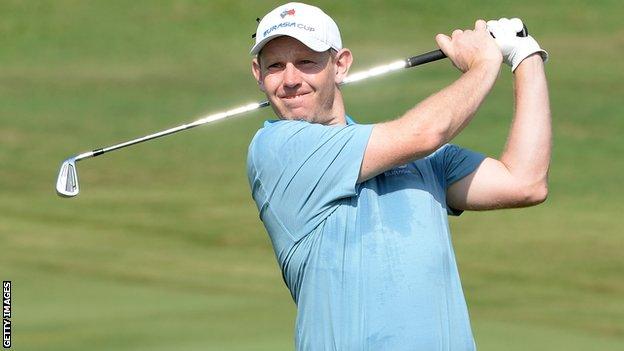 Stephen Gallacher will play a practice round with former champion Sandy Lyle as he prepares to make his Masters bow.

"Sandy said he'd take me out on the Saturday," said Gallacher, who will arrive in Georgia on Friday.

"And I'm hoping to go round with someone like Jose Maria Olazabal - people who always play well - to ask a few questions on how they do it."

Lyle's one-shot victory at Augusta came after a birdie-three from the sand at the final hole.

And Gallacher, 39, was among an army of Scottish fans back home watching the thrilling climax.

"It's pretty much a dream come true," he said of his impending debut at the first major on the golfing calendar.

"I've watched all the greats win there. As a kid you were allowed to stay up late and watch it on the telly."

Gallacher has earned his place in the Masters field following a great start to the season, winning the Dubai Desert Classic for the second year running and posting top 10 finishes at the Abu Dhabi and Cadillac Championships.

Asked what element of the famous course he was most looking forward to, Gallacher told BBC Scotland: "Just driving in the gates and taking it all in.

"It's all brand new to me. I've been playing a long time and it's the only major I haven't played in.

"I've had invites in the past but I turned them down because I only wanted to play it in the tournament.

"I'll just try to prepare as normal. It's one of the courses where you have to be so precise.

"I'll just set out a game plan and hopefully stick to it."

Lyle and Gallacher will be the only Scots playing at this year's Masters.