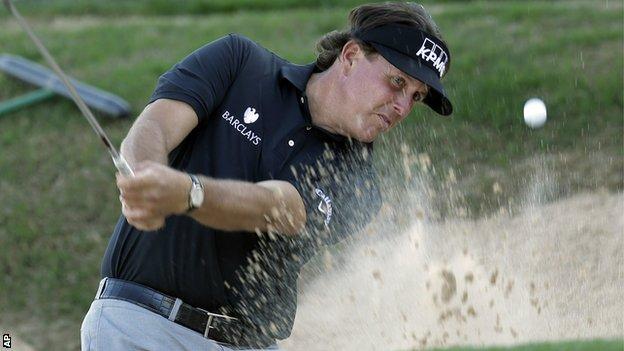 We are nearing the end of a 241-day wait for a return to major championship golf.

Such is the lengthy gap between the US PGA Championship in August and April at Augusta, the Masters is always the most eagerly anticipated of the majors.

But there's an inevitable feeling that this year's contest for the Green Jacket is coming too soon for many of the game's top names.

An alarming number are striving for form and fitness, with only this week's Shell Houston Open to be played before they head to Georgia.

Three times Masters champion Phil Mickelson is the latest to suffer an injury setback at just the time when the golfing clock starts to quicken.

The American left-hander suffered his second injury-related withdrawal of the year when he pulled out of the Texas Open last Saturday. The reigning Open champion suffered a pulled oblique muscle in his side while hitting his drive on his 10th hole.

"As you might imagine he's trying to get ready for Augusta," said his caddie Jim 'Bones' MacKay. "He's hitting a lot of drivers and hitting them a little harder.

"He felt a little pain in his side. He decided he didn't want to take any chance relative to what's going on in the next couple of weeks."

It is too early to say whether the 43-year-old Mickelson will be able to take his place in the Houston field. And, although his withdrawal at the weekend was precautionary, it also raises doubts over whether he will be fit to compete at the Masters.

With Tiger Woods nursing a back injury there are worries that the first major of the year might be played without golf's two biggest personalities for the first time in 22 years. These two superstars have seven green jackets between them.

Mickelson is keen to shake off an indifferent start to the year. Aside from his runner-up finish in Abu Dhabi, he has failed to record a top 10 in 2014.

Of 26 rounds completed, he has finished in the 60's on only six occasions. Furthermore, the newly renamed Golf Club of Houston offers ideal Augusta preparations in a competitive environment.

The 7,441-yard par-72 Redstone layout has shaved banks off its greens with challenging collection areas. Green speeds are usually lightning fast, just as they are at the Masters. So, with the first major of the year in mind, it is the ideal venue to find form.

Former US Open and PGA winner Rory McIlroy will be there looking to build on his encouraging start to the year. All that's been missing for the 24-year old has been a win. Another week living on a leaderboard would do his Augusta hopes no harm at all.

For Ian Poulter, Lee Westwood and Luke Donald, the imperative is even greater.

Poulter's 20th-place finish last time out at Bay Hill is his best result of a miserable year so far. Donald, meanwhile, is looking to consolidate a return to form with two top-eight finishes in his last three events. These are encouraging signs for the former world number one and his remodelled swing.

Westwood's outlook is more worrying. The Englishman's strength of hitting greens in regulation has deserted him. He languishes 110th on the PGA Tour statistics in that regard. His short game may have improved but he has failed to contend throughout the year and has slipped to 38th win the world rankings.

The 41-year-old was runner up at the Masters four years ago and third in 2012. He has not been outside the top 11 at Augusta since 2009. To maintain that form he will need a rapid improvement in his play from tee to green.

It's also a huge week for Padraig Harrington. The three-time major champion has to win in Houston to maintain his record of playing in every Masters this century.

Johnson Wagner and last year's winner DA Points have proved it possible to snatch a trip to Augusta with victory at the Texas venue but it will be asking a lot of the out-of-form Irishman, who has missed five cuts in nine PGA Tour events this year.

Henrik Stenson heads the field. The world number three could go to the top of the rankings with a win in an event in which he finished tied second 12 months ago.

There were encouraging signs from the Swede last time out at Bay Hill and surely he represents Europe's best chance of a first Masters title since Jose Maria Olazabal in 1999.

The continent's last major winner, Justin Rose, is elsewhere honing his Masters skills and has already played practice rounds at Augusta. He has played just five events this year with a missed cut in his most recent one at Bay Hill.

There must be a danger Rose will be somewhat undercooked the week after next. He's suffered injury worries as well and rather typifies the year to date for so many of the game's biggest names.

Meanwhile, it could not be more exciting for two of Britain's most promising youngsters. Amateur Champion Garrick Porteous and US Amateur winner Matt Fitzpatrick are both looking forward to Masters debuts.

Before that there's a hugely proud date for English golf this Wednesday when the two play each other for the Georgia Cup - an 18-hole charity match between the reigning US and UK amateur champions - at the Georgia Golf Club.

Then it is off to Augusta, with the 24-year-old Porteous intending to turn pro immediately afterwards. He will forgo his place at the US Open to take up playing opportunities on the European Tour.