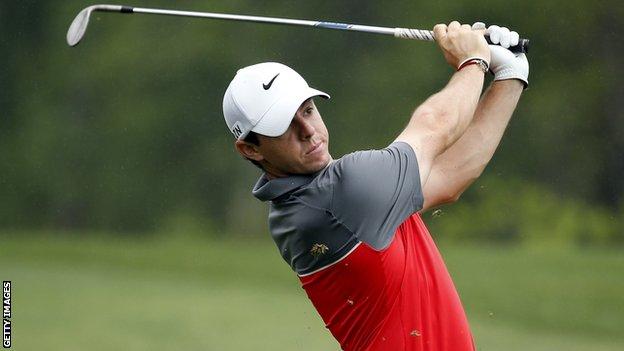 Rory McIlroy is nine shots behind leader Sergio Garcia after firing a one-under-par 71 in the second round of the Houston Open.

Having carded a two-under-par 70 on Thursday, the former world number one lies on three under for the tournament.

Former Open winner Darren Clarke missed the cut after a 75 left him six over.

Padraig Harrington had to win the tournament to secure a place in the Masters but he also failed to make the cut, ending four over after a 79.

McIlroy got off to a flying start on Friday with birdies on the 10th and 12th and gained another at the first.

However, the 24-year-old Northern Irishman then lost his momentum and had to settle for a 71.

He missed from three feet for par on the third and did well to drop just one shot on the sixth, scrambling a bogey five from a greenside bunker after taking a penalty drop following a wayward tee shot.

Garcia followed his opening 67 with five birdies and an eagle in a flawless display at the Golf Club of Houston, and the Spaniard holds a one-shot lead on 12 under.