This hallowed corner of an unremarkable Georgia town is one of sport's most famous settings, the tournament one of the world's most unique events. Here are 18 reasons why we love the Masters.

1 The setting - 'the most perfect picture' 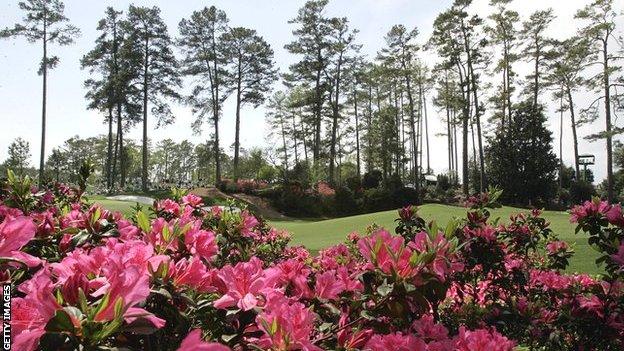 Ah, Augusta. Just the name evokes an iconic image in green, punctuated by explosions of colour from banks of azaleas and framed by towering pines, with grass so velvety you could make a suit out of it.

Driving up the adjacent Washington Road strip, with its bars, burger joints, motels, parking lots and neon plantations, you would struggle to believe such treasure could lie over the fence. "It's like being in the most perfect picture that has ever been painted," said England's Ian Poulter.

2 The atmosphere - 'a wonderful feel'

Think genteel country club rather than brash sports venue. The smart but humble 19th century plantation-style clubhouse at the end of Magnolia Lane sets the tone for this spring rite. The visual splendour, the traditions and history, the reverence of the spectators and Augusta's limited-numbers policy add to the occasion. "It's a very interesting place and has a wonderful feel. I still love it after 40-odd years," says veteran BBC golf broadcaster Peter Alliss.

3 The rules - no running, no phones

It's Augusta's way or the highway, but the rules - strictly enforced with Southern charm - add to the ambience. Broadcasters and the media are also expected to toe the line. Fans are to be known as "patrons" and controversy is to be avoided. The no-running rule does at least provide the morning spectacle of speed-walkers scuttling off to all parts to place chairs. Phones are also a no-no, as is sleeping on the course. "I always marvel at how they control all those people with a bit of string. Possibly some trepidation at putting a foot wrong," notes Alliss. 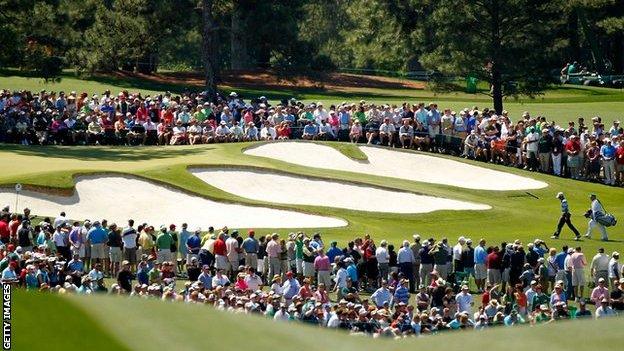 4 The hospitality - your own Masters plastic cup

Stay on the right side of the law and the Masters will treat you well. Sandwiches, including the traditional Pimento Cheese, cost between $1.50 and $3 and domestic beer, in Masters-logoed plastic cups you can take home, is $3. Fancy foreign stuff is $4. Despite an image rooted in tradition, the Augusta National is always looking to refine and innovate, such as the state-of-the-art digital coverage. Southern splendour with a modern agenda.

5 The history - traditions and landmarks

As the only major at the same venue every year, each triumph and disaster adds another layer to the legend. The National was opened in 1933 on the site of an old plant nursery, and the first Masters - then called the "Invitational" - was staged the following year. Traditions abound, such as the Champions Dinner, ceremonial starters, the par-three contest or amateurs bunking down in the Crow's Nest above the clubhouse. Landmarks also become old friends. The recent removal of the Eisenhower tree because of damage was news around the world.

6 The Green Jacket - with its own rules

The tropical-weight emerald blazer might not be to everyone's taste, but it is one of golf's most coveted accolades. The jacket was first introduced for members in 1937 and ordered from Brooks Uniform Company in New York.

Sam Snead was the first winner to receive a jacket and honorary membership in 1949. The reigning Masters champion can take it home for a year, then it must be kept at the club. The jacket comes with a two-page list of rules, according to last year's winner Adam Scott.

A Masters badge feels like Willy Wonka's golden ticket to most but the lucky few (well, roughly 30,000 a day on practice days, half that during the tournament) get one of the best views in sport. Augusta's seat-saving etiquette is unique. Plonk your green fold-up chair anywhere outside the ropes and return hours later to reclaim your spot. It will be empty and waiting.

The Tuesday evening shindig for past champions is one of sport's most exclusive clubs. The elite few dine off a menu dreamed up by last year's winner.

Tradition dictates they opt for dishes from their homeland, throwing up some mouthwatering delicacies over the years such as Sandy Lyle's haggis, neeps and tatties and Charl Schwartzel's monkey gland sauce.

Arnie, Jack and co. can order off the clubhouse menu if they're not game for a bush tucker trial. Australia's Scott will serve Moreton Bay Bugs, a surf 'n' turf BBQ and his mum's pavlova. "I didn't feel I could serve kangaroo or crocodile to these guys."

9 The par-three tournament - and 53-year curse

The family fun, back-slapping and bonhomie act as a release valve before the main event.

But there is mischief at work on the banks of Ike's Pond - the Curse of the Par Three. In its 53-year existence, no par-three champion has ever won the Masters in the same year.

10 Amen Corner - 'those holes are monsters'

Trouble round the Corner?

Golf's most iconic stretch of holes, visually stunning and technically demanding, Amen Corner can be a round-wrecker or a springboard for a back-nine charge.

The term "Amen Corner" was coined by sportswriter Herbert Warren Wind in 1958 for the area down at the lowest part of the course: the 11th, 12th and tee shot on 13.

The par-four 11th is the second most difficult hole on the course, after the 10th, followed by the short 12th across Rae's Creek where the wind swirls and makes club selection so difficult. Tom Weiskopf holds the record with a 13 there, in 1980. "Those holes are monsters," says three-time champion Gary Player. "Amen Corner - what an appropriate name."

11 The oak tree - lurkers and shakers

If leaves and branches could talk, these boughs would have thousands of stories to tell. The old oak - or actually two oaks, one smaller one next to the main tree - on the course side of the clubhouse is the hub of Masters week. 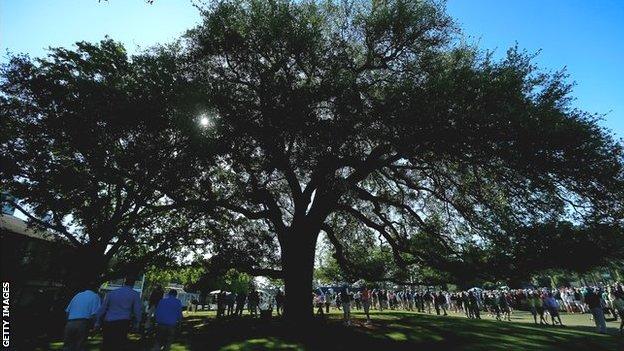 All golf's movers, shakers and hangers-on will be found lurking in its shade, interviewing players, doing business deals, gossiping, being seen.

Everyone's guilty of "fomo" (fear of missing out) as eyes dart and heads swivel, trying to spot someone more important to talk to. 'Meet you under the tree' is a traditional Masters refrain for those with the right badge.

12 The caddies - white suits all round

That ice-white boiler suit is quintessential Augusta. Before 1983, staff caddies were assigned to Masters players. All were black, and many went by nicknames such as Fireball, Ironman and Cemetery. After 1983, players were allowed to bring their own caddies but they still had to wear the traditional white jump suit.

Two-time champion Ben Crenshaw's long-time Masters caddie Carl Jackson is one of the remaining old school Augusta bagmen, who began working at the course aged 14 in 1961. He will work a record 53rd Masters this year. "That suit is pretty thick so you can get really hot. At least you can pack light - a couple of pairs of shorts and some T-shirts to wear under it," said Martin Kaymer's caddie Craig Connelly.

An icon in white, the modest manor belies is status as the home of the Green Jackets. Built in 1854 by the owner of the then indigo plantation, it stands sentinel at the highest point of the course. 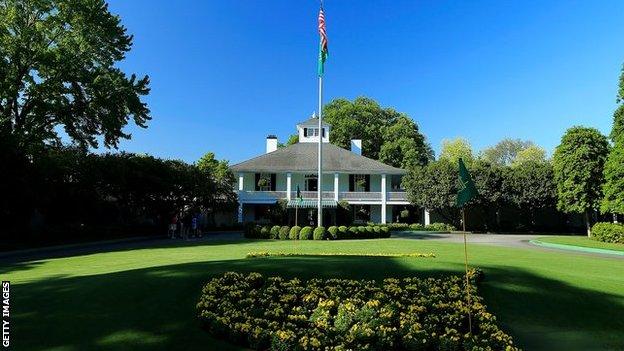 The front door, at the end of Magnolia Lane, opens onto a short hallway with a reception desk and offices. Twenty odd paces take you through a lounge, housing the Masters trophy, to the back door and the course. A spiral staircase leads to the library, an informal dining room with additional seating on the veranda. The Champions Locker room - officially the Masters Club Room - is to the rear. "The clubhouse has grown over the years but it is still attractive and comfortable, not glitzy at all," said Alliss.

Another tradition adding to Masters lore, wide-eyed amateurs are invited to stay, for a modest (and undisclosed) sum, in the eaves of the clubhouse during Masters week. The five-room dormitory is reached from the library via an unmarked door which leads into a small hallway.

Masters champions to have stayed in Crow's Nest

On one side there is another door to the Champions Locker Room. Plenty of young men have stumbled, accidentally or otherwise, into the exclusive domain of Masters winners. Opposite, behind another non-descript door, is the steep staircase to the Crow's Nest and its unmistakeable glass cupola.

Among former residents to have won the Masters are Jack Nicklaus, Tom Watson, Phil Mickelson and Tiger Woods. Tales of 'Nesters' abound - one has Nicklaus getting reprimanded for abusing the club's hospitality by having two steaks a night as a 19-year-old in 1959.

The most exclusive place in this most exclusive of clubs, the domain of the few is another Masters mystique. Behind a door marked "Masters Club Room - private", past champions get to change, eat, gossip and gripe in seclusion. Twenty-eight oak lockers with brass nameplates line the room, with two players to a locker. Adam Scott shares with Gary Player. "Gary gets a lot of mail so there's not much room for my stuff," says new incumbent Scott.

If the visual splendour and waft of pine and cut grass isn't enough of an assault on the senses, the Masters keeps your ears busy too. The roars greeting great shots reverberate around the pines, which act like the reeds in a giant mouth organ, especially on the lower parts of the back nine where the noise is coralled.

A Sunday roar has a deeper, more urgent resonance than a Thursday roar. And a Woods or Mickelson roar tops the lot. "To feel that energy and to hear the roars and be a part of what's happening that final nine holes, it's the greatest experience for a professional golfer," says 'Lefty'.

The list of Masters winners reads like a who's who of golf and reinforces its status. Jack Nicklaus tops the pile with six wins followed by Arnold Palmer and Tiger Woods on four. Phil Mickelson, Nick Faldo, Gary Player, Sam Snead and Jimmy Demaret are on three each. This week marks the 25th anniversary of Faldo's first win. His third victory in 1996 is still the last by a player from Britain and Ireland. Europe's last winner was 15 years ago, when Spain's Jose Maria Olazabal won his second Green Jacket.

18 The X factor - a sprinkle of magic

There is more to winning a Green Jacket than just piecing the parts together. Sure, you need a bit of length off the tee, have pin-point precision with your irons, chip and putt like a God and keep a lid on the nerves, but a sprinkle of magic helps, too.

"When your eyeballs are flashing because your heart is hitting you so hard in the chest from inside out and you've got to deal with degrees and inches, it's a hard game. But somebody is going to pull it off and when they do, they're revered for it," said Azinger.