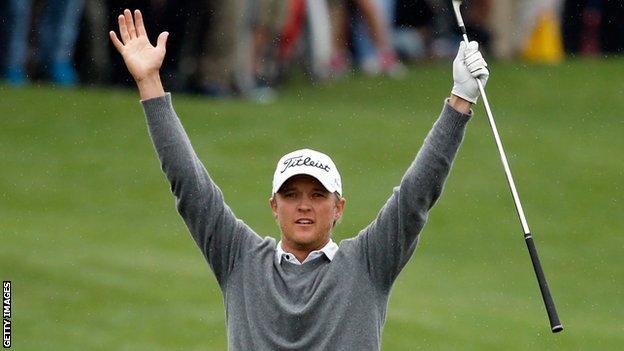 Australian Matt Jones booked his first trip to the Masters with a sudden-death play-off victory over Matt Kuchar at the Shell Houston Open.

The 33-year-old, who started six shots behind the American overnight leader, chipped in from 42 yards to seal a maiden PGA win at the first extra hole.

Kuchar bogeyed two of the final three holes as he let victory slip in the final tournament before Augusta.

Jones, ranked 88th before this tournament, will make his debut at Augusta National on Thursday after picking up more than $1m (£600,000) prize money in Houston.

Spain's Sergio Garcia finished third, two shots behind the leaders, while Northern Ireland's Rory McIlroy moved 30 places up the leader board with a final round of 65 that left him tied in seventh.

McIlroy, who had started the day well out of contention after a 74 on Saturday, gave himself something to build on heading into the year's first major with a seven-under final round.

"It was a good way to end the week, obviously," said the two-time major winner. "I wanted to shoot something in the 60s at least today to give me some positive vibes going into Augusta. I played really well, played really solid from tee to green again.

"I'm happy with how this week went, even though I didn't quite do what I wanted to do in terms of getting in contention.

"But I sort of made up for it today. I couldn't be in a better mood getting on the plane and heading over [to Augusta] tonight."