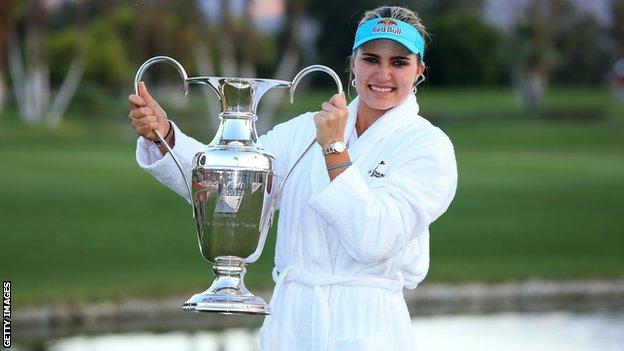 American Lexi Thompson has earned her first major after a three-stroke victory from Michelle Wie at the Kraft Nabisco Championship in California.

Britain's Charley Hull, 18, had a disappointing four-over 76 to finish joint seventh after being just two off the lead going into the final round.

"It's a dream come true. This is what I've worked hard for," said Thompson.

Thompson celebrated with the traditional victory leap into Poppie's Pond near the 18th green.

She is the second-youngest major winner in LPGA Tour history at 19 years, one month and 27 days.

Wie, 24, who was in contention all week, used her driver only four times, choosing to hit fairway-metal stingers on the other 10 driving holes, leaving her as much as 60 yards behind Thompson.

"I stuck with my game plan and I think it was the right play," American Wie said. "I just couldn't get anything going today."