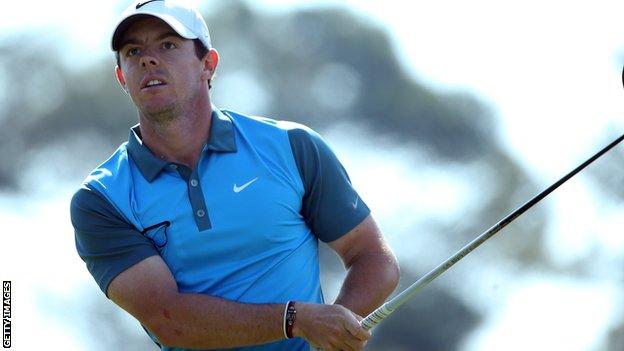 Rory McIlroy is targeting his best finish at Augusta after closing his third round at the Masters with two birdies to end at three over par.

"It wouldn't be the week I wanted, but the way the last two days have gone it wouldn't be a bad finish," he said.

Overnight leader Bubba Watson has started his third round.

In trailing the American by 11 shots before play on day three, McIlroy needed a score of less than 70 to threaten the top of the leaderboard.

After a torrid second-round 77, which included a par putt on the 18th to save him from missing the cut, McIlroy was the first player in action on Saturday, with Augusta member Jeff Knox his playing partner to mark his card.

Knox completed the 18 holes in one shot fewer than the 2011 US Open champion, who at three over is one shot worse off than his final score in last year's tournament, where a 79 on day three scuppered his chances.

"It's just turning those 77s and the high ones into 72s or 73s, that's the real key for me around here," said McIlroy, who averaged fewer putts on Saturday than in his first two rounds.

"It's just making sure that I don't let a round get away from me, like it sort of did yesterday. I still haven't figured out how to do it.

"It was nice to birdie three of the last four and shoot something under par.

"Obviously I wanted something a little better than that, but with the way these greens are and the way the golf course is set up, it's hard to go really low like I needed to, to try and get myself back in the tournament."

Follow live text commentary on the Masters final round on the BBC Sport website from 16:00 BST, watch live coverage on BBC Two from 18:30 BST and listen to live commentary from BBC Radio 5 live from 20:30 BST.

You can also watch further in-depth action from Augusta National with up to seven live video streams available on your mobile, tablet, desktop and Connected TV. Full coverage details here.