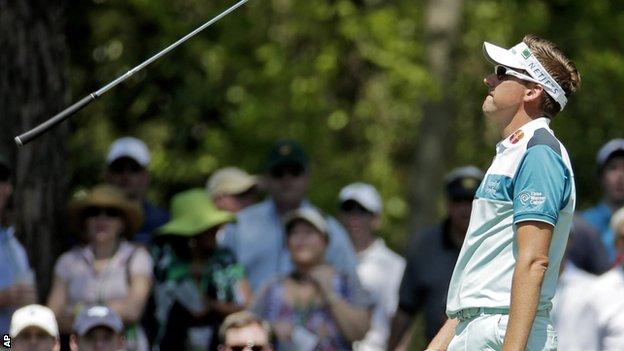 England's Ian Poulter was left "raging" with his performance, despite a second successive two-under par round of 70 at the Masters in Augusta.

The 38-year-old dropped two shots on the back nine and is even par, five off the lead ahead of the final round.

"It's been an absorbing day, thoroughly enjoyable. There have been storylines everywhere. It is the day that the 78th Masters came alive. The nature of major championship golf is that the first two days can be a real grind, but the authorities know what they are doing when they set up the course."

"I am disgusted with how I finished," said Poulter. "The way I played on Friday was disappointing and I think I'm even more disappointed today."

Lee Westwood "played solidly" to card a 70 and be in contention at two under.

"I said I wanted to play the par fives better and played them four under par, which was very good," said the 40-year-old Englishman, who had not made a birdie on any of the four par fives in the previous two days.

Westwood has finished in the top 10 of major events on 16 occasions, but having never secured one of golf's major titles, will enter Sunday three shots off co-leaders Bubba Watson and Jordan Spieth.

"The person who wants to see Lee Westwood win a major more than anyone is Lee Westwood," added the Nottinghamshire-born player. "All I can do is keep putting myself into contention, try and get off to a good start and play the front nine properly to have a chance coming down the back nine."

The Augusta course averaged under 74 strokes for the first time during this year's tournament on day three, with the par fives again playing as the easiest holes on the par 72 course.

Only two of the last 12 second round leaders have gone on to win the tournament and despite the favourable conditions, Watson, who held the overnight advantage, gave the field hope with a spluttering start which included his first three-put in his last 47 holes at the Masters.

Poulter, who hit three birdies before the turn on Saturday, said he was "angry" to not capitalise on his good start, while compatriot Justin Rose was also frustrated to not make further gains as he finished three under on the day.

The US Open champion, one under overall at Augusta, did not compete in the two tournaments ahead of the Masters due to injury, but acknowledged he was "still in it" going into Sunday.

Rose on the fairway

Justin Rose was the most accurate player from the fairways on day three, hitting 15 of 18 greens in regulation

"The two weeks off might suit me tomorrow," said Rose, who holed a wedge for eagle on the third hole. "I might be fresher. If I go and post a great round of golf, it will look like the best two weeks off of golf I've ever had."

Northern Ireland's Rory McIlroy started the day's action as the first player on the course and carded a one-under-par 71 to move to three over for the tournament.

Welshman Jamie Donaldson sits on the same mark after six bogeys marred his card as he posted a 76 on day three.

Scotland's Stephen Gallacher, who started the day on one under, shot the worst score of round three with a nine-over-par 81 which featured successive double bogeys on the ninth, 10th and 11th holes.

Only 13 of the 51-strong field sit under par going into the final round, with 13 players within five shots of the leaders.

Follow live text commentary on the Masters final round on the BBC Sport website from 16:00 BST, watch live coverage on BBC Two from 18:30 BST and listen to live commentary from BBC Radio 5 live from 20:30 BST.

You can also watch further in-depth action from Augusta National with up to seven live video streams available on your mobile, tablet, desktop and Connected TV. Full coverage details here.