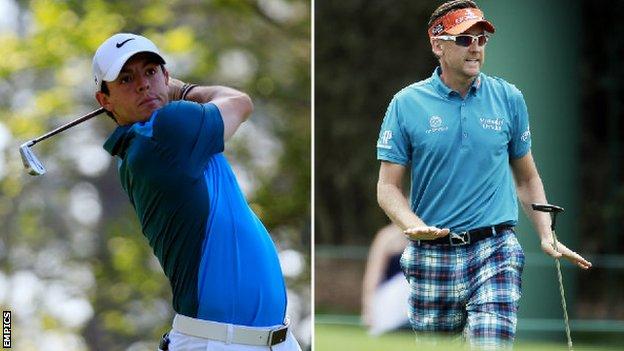 Rory McIlroy and Ian Poulter said poor performances on Augusta's four par five holes cost them a shot at winning the Masters for a first time.

Northern Ireland's McIlroy played the par fives to even on his way to a level par finish, eight behind winner Bubba Watson as he finished tied eighth.

"I'm just not holing the putts I need to or should," said McIlroy, 24.

England's Poulter, who ended two over, picked up one shot on the par fives, a haul he said "was not good enough".

Augusta's par five holes were statistically the easiest on the course for the week, with 436 of the 874 birdies arriving on them.

Watson, champion for the second time, played the holes to a score of eight under par, the number of strokes he eventually finished ahead of two-time major winner McIlroy.

"I finished even par for the tournament and even par on the par fives," added McIlroy, who ended the week ranked third for finding greens in regulation.

"It's not really good enough and I would guess the leaders will play those holes to around 10 under par.

Cash in on Augusta's par fives

Bubba Watson: -8 for the tournament, played the 16 par five holes in eight under - 72 strokes - making six birdies and an eagle

Rory McIlroy: Even for the tournament, played the 16 par fives in evens - 80 strokes - making five birdies

Ian Poulter: + 2 for the tournament, played the 16 par five holes in one under - 79 strokes - making four birdies

"This course teases you and then takes it away from you. I played well, I drove the ball as well as I have ever done."

Poulter, who is still seeking a first major title, was "disgusted" with his closing nine holes in round three and after the final day's play, said his performance on the par five holes cost him the tournament.

"Simple stats," he said. "I was seven shots worse than Bubba on the par fives and and 10 shots behind so I would have had a chance if I would have played them well.

"If I don't play them well I've got no chance. It's just not good enough."

Poulter was the fourth most accurate putter of those players to complete all four rounds and later tweeted he "will win a green jacket one day", but it was his compatriot Lee Westwood who mounted the best, if somewhat timid British challenge.

The 40-year-old bemoaned a slow start on day four where he dropped three shots in four holes before eventually finishing one over for the day and one under for the tournament - a third successive top-10 finish at Augusta.

"I had a chance but I didn't put any pressure on," said Westwood, one of only seven players to finish the tournament under par.

"The longest putt I sank was on the last and that was about three foot. It's a little bit disappointing but seventh I think is my best result of the year."

Welshman Jamie Donaldson tied for 14th on one over in only his second Masters, alongside England's Justin Rose, who was "frustrated" after three bogeys on the front nine scuppered his hopes of adding a Masters title to his 2013 US Open triumph.

"It was a tricky start," said Rose. "The pace of greens on three an four was exceptional and got in my head from that point. I got a bit gun shy."

Scotland's Stephen Gallacher recovered from an 81 - the worst round of the day on Saturday - to shoot two under and tie for 34th on six over, while Sandy Lyle completed his 100th competitive round at Augusta in 73 to end the week nine over.