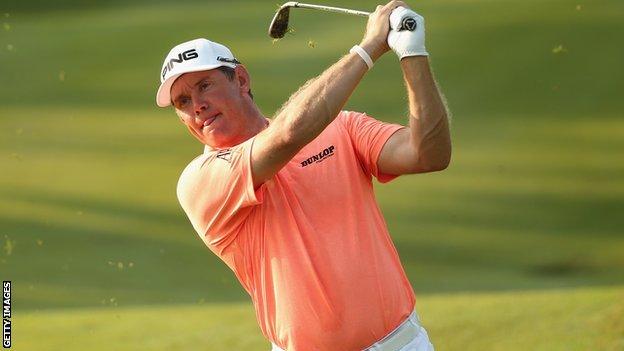 England's Lee Westwood shot a seven-under 65 to lead by one shot in a weather-delayed opening round of the Malaysian Open in Kuala Lumpur.

Westwood bogeyed the par-five 10th, his first hole, but finished with four birdies in his last five holes.

The 40-year-old, seventh at last week's Masters, said: "It's nice to have a good one and build some momentum."

The former world number one, now ranked 36th, is without a win since victory at the Nordea Masters in Sweden in 2012.

He added: "I had to be patient because I was hitting good putts and they weren't going in until I holed one from about eight feet on my 16th.

"I played well last week and I was happy to carry that on today."

Portugal's Ricardo Santos joined Hoey at five under, with Scott Jamieson among those a shot further back after completing 16 holes before darkness caused play to be suspended for the day.

Play was delayed for more than an hour because of a storm, meaning 42 players must resume their opening rounds on Friday morning.