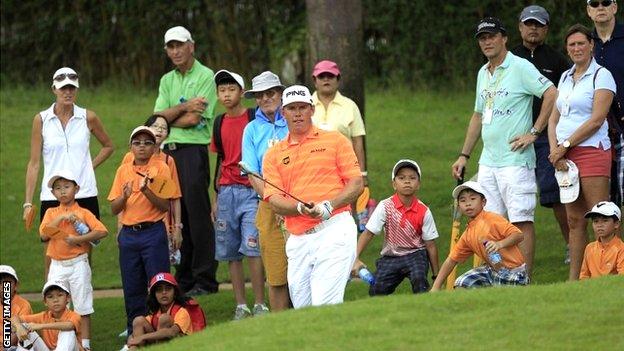 Lee Westwood carded a 71 to reach 14 under after the penultimate round of the Malaysian Open but his four-stroke halfway lead was reduced to just one.

Westwood, seeking his 13th win in Asia, had eight birdies in each of his first two rounds but made three on day three.

Andy Sullivan, the 27-year-old from Nuneaton yet to win on the European Tour, moved into second place on 13 under after seven birdies in his 66.

Ryder Cup player Nicolas Colsaerts dropped to fourth, six back, with a 72.

Spaniard Pablo Larrazabal, who took evasive action by jumping into a lake after being attacked by a swarm of hornets whilst playing the fifth hole on Friday, had a less eventful round of 70.

Larrazabal, who went on to birdie the fifth and card a 68 after his ordeal, made a par five at the hole on Saturday and shares 23rd place, 11 shots off the lead.

Sullivan, who was part of the victorious Great Britain and Ireland Walker Cup team in 2011, finished second behind Alejandro Canizares at the Hassan Trophy in March after a closing round of 63.

"It was tough out there to keep your concentration but I'm glad my adrenaline kept me going," he said of his third round at the Kuala Lumpur Golf and Country Club.

Westwood dropped two shots in round three, bogeying the last when his second shot finished in a fairway bunker and he missed a putt of five feet.

"It was tricky out there," he said. "I didn't play as well as I did the first two days, but there were some difficult flags and it was really hot.

"That's as hot as I've been on a golf course for quite some time. It was a real grind. I was leaking out there a little bit.

"You can get glazed up and lose your concentration quite easily but I'm leading going into the last round so I'm quite happy with that."