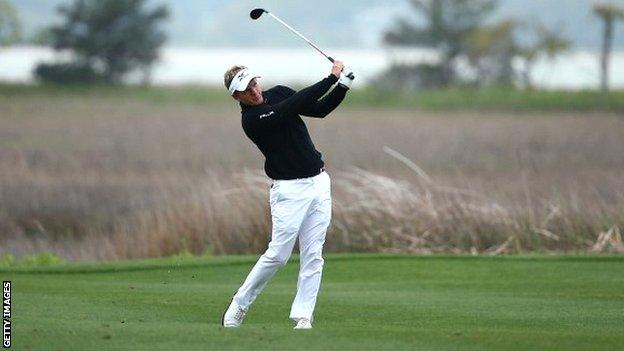 Former world number one Luke Donald enhanced his bid for a first PGA title since 2012 as a 66 put him two ahead after three rounds of the RBC Heritage.

But in damp conditions on Saturday he carded an eagle and six birdies to reach eight under par for the event.

Scotsman Russell Knox, who lost to Russell Henley in a play-off also featuring Rory McIlroy at the Honda Classic last month, is joint seventh at four under after four birdies in a 68.

English amateur Matthew Fitzpatrick, the 19-year-old from Sheffield, shares 16th after a round of 69 containing no dropped shots.

Defending champion Graeme McDowell is seven strokes off the lead in a tie for 22nd after four bogeys in a 72.

Donald, who lost a play-off to Brandt Snedeker in this tournament in 2011, recorded the most recent of his five American victories in March 2012 at the Transitions Championship.

"I've always liked this golf course," he said after the penultimate round at Harbour Town. "I'm really happy with the way I'm striking the ball. I felt like I was going to give myself a lot of chances.

"I think we're in for a very windy final day so I'll need to control the ball even better."