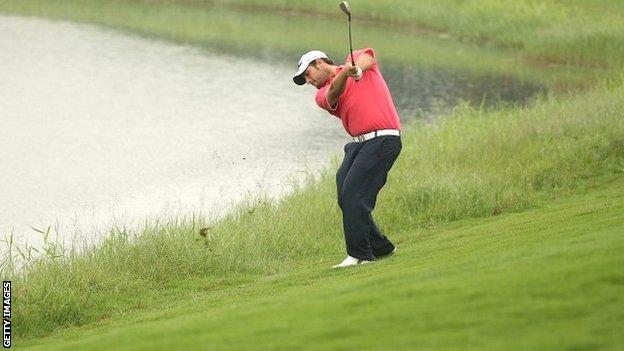 Frenchman Alexander Levy will take a three-shot lead into the final round of the China Open in Shenzhen.

He leads from Spaniard Alvaro Quiros, with Englishman Ian Poulter 10 shots adrift in a share of 11th after a 67.

World number three Henrik Stenson, who could replace Tiger Woods at the top of the rankings with victory this week, is 12 shots back tied for 21st after a 71.

Levy, seeking his maiden European title, has only recorded two top-10 finishes in 34 previous events, with a best of third place at last year's Munich Open.

With driving rain and gusting winds on Saturday at the Genzon Golf Club, he recorded three birdies in succession from the 11th before two dropped shots in three holes reduced his advantage.

"It was tough to stay focused, but I kept my mind in good condition and played some good shots. I'm happy with my round," Levy said.

"I want to continue to play like I have for the first three rounds and to enjoy the moment. I will be nervous [on Sunday], but because you're nervous doesn't mean you can't play well."

Quiros, whose most recent victory on the European Tour came in December 2011, had four birdies in five holes from the ninth but bogeyed the last.

Stenson, who in November became the first man to win the Race to Dubai and FedEx Cup in the same year, began with back-to-back birdies but dropped shots at two of his closing four holes.

Tommy Fleetwood is the leading Englishman on 11 under, two clear of first-round co-leader Simon Dyson.