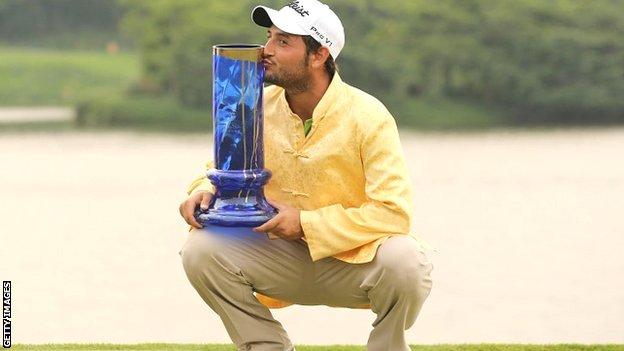 Three shots ahead overnight, the 23-year-old world number 282 made a superb birdie at the last for a round of 69 and a closing total of 19-under-par.

Englishman Tommy Fleetwood birdied the first three holes and had reduced the deficit to one shot but bogeyed the last for a 67 and finished second.

Ian Poulter had seven birdies in a 67 and shared fifth, eight strokes adrift.

World number three Henrik Stenson, who would have gone to the top of the world rankings with victory this week, began the final round 12 shots off the lead but had seven birdies in a 65 to tie with Poulter.

Dane Anders Hansen was the third player to finish on 11 under; he had six birdies in the first nine holes in a round of 63.

Northern Ireland's Michael Hoey compiled seven birdies in his first 14 holes to reach 13 under but dropped three late shots to finish in a tie for eighth.

PGA champion Jason Dufner began with a birdie and an eagle and had four more birdies, but had two double bogeys and a triple bogey eight in a 75 to finish 19 shots behind Levy in a share of 54th.

Having secured a fourth birdie of the day at the ninth, Fleetwood's challenge was halted when he drove into the trees at the par-five 13th and made a six.

The 23-year-old, who won the Johnnie Walker Championship at Gleneagles last year, picked up two more birdies but three-putted from the front edge of the vast, undulating 18th green at the Genzon Golf Club.

Levy's one blemish of the day came with a double bogey six at the 15th after his tee shot rolled into a divot.

However, he calmly dispatched his second shot to within 10 feet at the 575-yard par five 17th to set up a birdie, and then pitched to three feet from light rough at the last to finish in style.

"I hit one of my best shots on 17. I didn't feel pressure on the golf course because I'm confident," said Levy, who was showered with champagne by compatriots Gregory Bourdy and Raphael Jacquelin on the final green, as has become customary for a new French winner on the European Tour.

"I just played my golf and focussed on the target. I saw Tommy made a birdie on the 17th but I like the pressure."