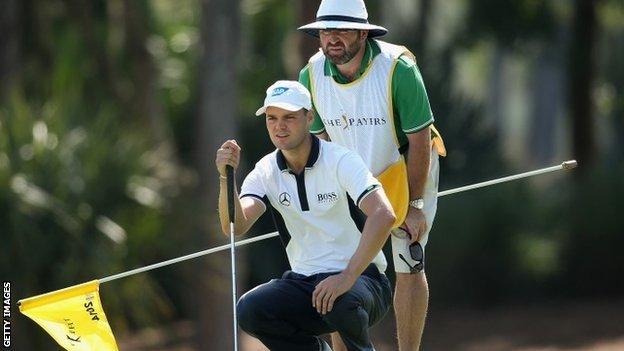 Martin Kaymer equalled the Sawgrass course record as he took a two-shot lead after the first round of the Players Championship.

Kaymer blazed his way to a nine-under 63, with English duo Lee Westwood and Justin Rose carding 67s for a nine-way share of fourth.

American Russell Henley is second on seven under par.

Northern Ireland's Graeme McDowell is handily placed on three under, with compatriot Rory McIlroy a shot behind.

Kaymer was seven under in the second half of his round, with the former world number one having started on the 10th.

The German picked up birdies on 11 and 15, before completing the front nine in 29 shots, including birdies on the final four holes.

Kaymer is seeking to become only the fourth European to take the title since it began in 1974 and also end a wait of more than two years for a tournament victory, with his last win coming in the 2011 WGC Champions tournament in Shanghai.

Martin Kaymer rose to the top of the world rankings in February 2011 after reaching the WGC World Match Play final, six months after winning his one and only major, the PGA Championship.

"The ball-striking has been a lot better the last two or three months. At the beginning, I couldn't make that many putts so I worked more on that over the last few weeks and it worked out nicely today."

Defending champion Tiger Woods is not in the field as he continues to recover from surgery on a trapped nerve in his back. The American, a 14-time major winner, could lose his world number one ranking to one of four rivals in his absence.

Australia's world number two Adam Scott has work to do if he is to take top spot and is well adrift of the top-16 finish he requires at five over.

Bubba Watson, who won his second US Masters last month, is three under while fellow American Matt Kuchar and Sweden's Henrik Stenson are both one under and they will all need to make considerable progress up the leaderboard by Sunday evening if they are to overtake Woods.

England's Ian Poulter and Wales' Jamie Donaldson are two over after they carded 74s, while Northern Ireland's Darren Clarke is a further two shots behind them.