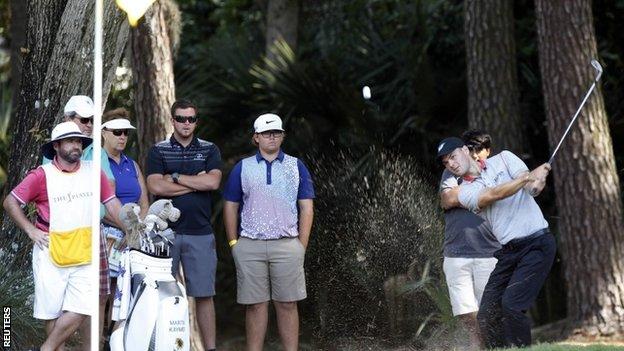 Germany's Martin Kaymer is one shot clear of Jordan Spieth of the United States at the halfway stage of the Players Championship at Sawgrass.

Kaymer posted a three-under 69 to move to 12 under after his course record-equalling 63 on Thursday.

Masters runner-up Spieth, 20, shot the day's best round with a six-under 66.

England's Lee Westwood and Justin Rose are in a share of fourth place on six under while compatriot Brian Davis is a shot further back after a 67.

Kaymer hopes he is finding form at a key time of the year.

The 29-year-old said: "I'm very happy with the way I've played in the last four or five weeks, so the next step is just putting yourself in contention and to hopefully win.

"If not, it's OK, but as long as you put yourself in contention for the next few weeks, especially now we're coming up to the US Open and British Open."

Graeme McDowell is also on five under, but fellow Northern Ireland player Rory McIlroy only just made the cut, picking up a birdie on the last to move to level par.

Wales' Jamie Donaldson is three under after a five-under round in which he picked up four shots on the homeward nine.

England's Luke Donald and Ian Poulter moved up the leaderboard with three-under rounds, moving them to two and one under respectively.

Australian world number two Adam Scott faces a battle to secure the top-16 finish needed to replace Tiger Woods at the top of the rankings despite a five-under round of 67 that dragged him back to level par.

Scott, who revealed he married his long-term girlfriend Marie Kojzar in a small ceremony in the Bahamas in April, said: "My putting is not that great. My feel is just way off at the moment.

"Anything outside 10 feet or even closer, six feet, I just don't have a good chance. So I've got to hit a few good shots here and there."

Sweden's Henrik Stenson might be more likely to topple Woods. The Swede will overtake the 14-time major champion with a top-six finish and is three under after birdies on 17 and 18.