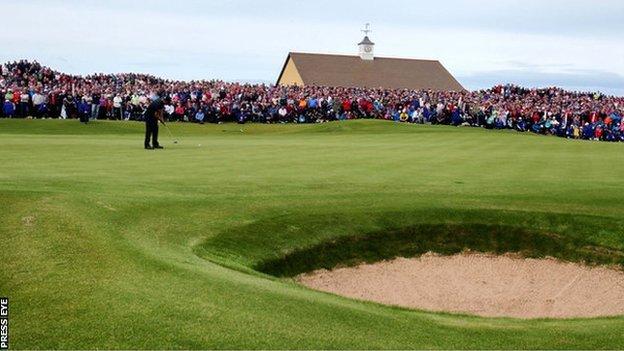 The Royal and Ancient says it remains "some distance" from being able to stage the Open Championship in Northern Ireland for the first time since 1951.

Speculation that the Open may return to Royal Portrush has been circulating for some time, with reports claiming a deal had been done for 2019.

However the R&A's response on Twitter labelled these as "Portrush rumours".

"Discussions have been positive but we are still some distance from being able to take the Open to Northern Ireland."

Max Faulkner won the only Open to be staged outside England and Scotland at Royal Portrush 63 years ago.

A statement released by the R&A on Sunday confirmed that discussions were under way, but added that there was a long way to go before the plans may come to fruition.

If the R&A are looking on this week, they are seeing the way the entire community has taken to the Giro d'Italia

"As part of our commitment to examine the feasibility of staging an Open Championship at Portrush, the R&A continues to discuss this at a conceptual level with Royal Portrush Golf Club and the Northern Ireland Executive."

The R&A denied reports last summer that the Open was set to be held at Portrush in 2018.

R&A chief executive Peter Dawson admitted that while it is "a fantastic golf course," concerns remain over the infrastructure required to stage a major and he believes the current nine-course Open rota is "about right".

Despite the R&A's statement on Sunday, Northern Ireland's Tourism Minister Arlene Foster said that the success of this weekend's Giro d'Italia showed the province's ability to stage major sporting events.

"If they are looking on this week and they are seeing the way the entire community has taken to the Giro d'Italia," she added.

"Obviously if the R&A does make a decision to put Royal Portrush on the rota it will be a tremendous thing for Northern Ireland and a very positive sign we are moving confidently on and I think we want to send that message out."

The 2012 Irish Open at Portrush drew massive crowds and the likes of major champions Rory McIlroy, Darren Clarke and Graeme McDowell have been lobbying on the club's behalf.

It has also been suggested that the R&A would hasten its decision after Portrush emerged as a surprise contender to stage the US PGA Championship.

The PGA of America is studying the impact of holding the event outside the United States, with the earliest possible date in 2020.

It had been thought that Asia would be the most likely venue, but PGA of America president Ted Bishop said in November last year that he was interested in Portrush.