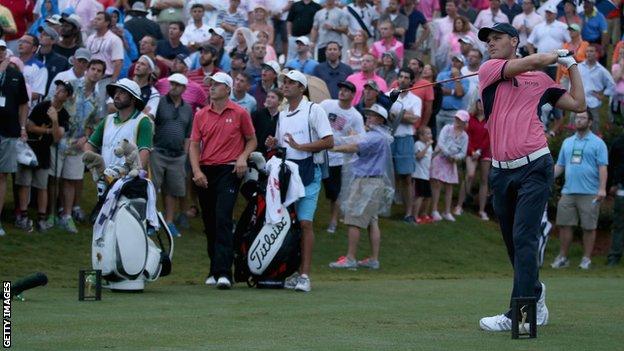 Martin Kaymer practised until his hands bled in his quest to return to golf's big time.

With the prestigious Players' Championship trophy in his possession, the 29-year-old German can reflect with huge satisfaction on a tortuous journey back to the top of the game.

It is hard to underestimate just how impressive this victory in the PGA Tour's flagship tournament was. He led from start to finish after an opening 63 but it took the gutsiest of putts on the 71st green to realise the win he so desperately craved.

Kaymer had been cruising until a 90-minute break when the Sunday evening thunder rolled in. He resumed with a horrible double bogey at the 15th and from then on it was only his will to win that saw him through.

Martin Kaymer rose to the top of the world rankings in February 2011 after reaching the WGC World Match Play final, six months after winning his one and only major, the PGA Championship.

His victory at Sawgrass moved him up from 61 to 28 in the rankings.

He had the best part of 30 feet downhill with at least four feet of left to right break when he faced that crucial par putt on the island green 17th. Somehow Kaymer found a way to locate the middle of the cup.

It was one of the greatest putts seen at Sawgrass, and helped seal a victory to suggest Kaymer is capable of adding to his one career major. It also propelled him back into the heart of this year's Ryder Cup reckoning.

He has finally departed the doldrums. A world number one in 2010, he had tumbled out of the top 60 while dedicating himself to new techniques to make him a more complete golfer.

After winning the 2010 US PGA Championship, one of four victories that season, Kaymer went to world number one the following February. But he knew he was incomplete as a golfer because he could only move the ball left to right through the air.

The remodelling of his action to be able to add a draw to his stock fade is somewhat akin to what Sir Nick Faldo did to make himself capable of winning majors. It's been a case of two steps back to advance three.

"His hands can be in some state. You know they can bleed. He spends hours on the range when he's away from tournament play and back in Phoenix at Whisper Rock and then when he's back in Germany with his coach Gunter Kessler.

"He was probably at his lowest towards the end of last year. He was really struggling because he still had the really bad shot going left, which he hates.

"He just stripped it down and went back to basics with Gunter. He now knows he can draw the ball when he has to and that's what he's going to do."

That level of dedication is fuelled by an immense desire to win and this victory means as much to him as his PGA triumph at Whistling Straits.

"It was not about how good I play or how bad I play, it's about how much you want that win," Kaymer said.

"We worked so hard and we went through ups and downs the last two years, and it's very tough because as an athlete you always want it now, you always want the success now, but in golf you just cannot force it."

The day before Kaymer shot his opening 63 at Sawgrass, Ryder Cup captain Paul McGinley walked a few practice holes with the German. Kaymer struck the decisive putt at Medinah in 2012 and is desperate to play for the Irish skipper at Gleneagles.

That's one of the reasons he sees this epic victory as a launch pad for the rest of his career. "It's very easy to just be happy now, relax and let things happen," Kaymer said.

"But now it's a time we have to work even harder. I need to sit down and reflect on the round, reflect on the last 36 holes that I played because I shot only one-under par on the weekend. It's OK, but there was a lot of room to be better.

"We still have three majors left this year. I'm not saying that I'm thinking about it now, but there's still a lot of golf left this year that I would like to participate on the weekends."

Perhaps his faithful caddie summed it up best. Connelly said: "I shouldn't say he's back to the old Martin because he is obviously a much-improved golfer. The mindset is the old Martin, the golfer is better."