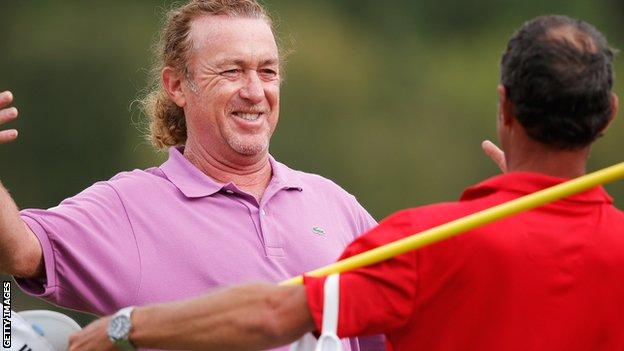 Miguel Angel Jimenez became the first man over the age of 50 to win on the European Tour with victory in a three-man play-off at the Spanish Open.

The 50-year-old Spaniard finished tied on four under par with Richard Green and Thomas Pieters.

The long wait for victory

His 27th appearance is a European Tour record for the most number of appearances in an event before winning it for the first time.

Par on the first extra hole, the 18th, was enough to give him the title.

"There's no words to describe what it means to me," said Jimenez. "You need to be into my skin but I'm not going to let you. It's amazing."

"All the victories are special, all are unique, some of them give you more money, some less, but all of them are important. You play to win and when you make it you have to appreciate it."

Jimenez had let a two-shot lead slip as Green looked set to claim victory. However, the Australian triple-bogeyed the 14th hole when one clear.

The world number 34's first win at his home national tournament came at the 27th attempt. Of his 21 victories on the European Tour, 14 have come since he turned 40.

The success also extends Jimenez's own record for being the oldest winner in European Tour history to 50 years and 133 days. His last win came at the age of 49 years and 337 days at the 2014 Hong Kong Open.

The Malaga-born golfer was in contention to become the oldest major champion in history before finishing fourth in the Masters in April. Seven days later, he won on his Champions Tour debut.

Jimenez now lies just outside the automatic qualification places for this year's Ryder Cup, which takes place at Gleneagles in September.

If he qualifies or is selected by captain Paul McGinley, Jimenez will become Europe's oldest ever player. The current record is held by Ted Ray, who competed in 1927 aged 50 years, two months and five days.

"I would love to make the Ryder Cup team, I would break all the records at 50," added Jimenez, whose last appearance was at Celtic Manor in 2010.