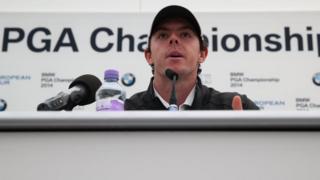 McIlroy on split with fiancee Wozniacki

Rory McIlroy faces the media on the morning he revealed he had split with his fiancee, tennis player Caroline Wozniacki.

McIlroy, 25, is at Wentworth ahead of the European Tour's flagship event, the PGA Championship.

The Northern Irishman said he wanted to concentrate on his golf and added he would go ahead with his playing schedule as planned.