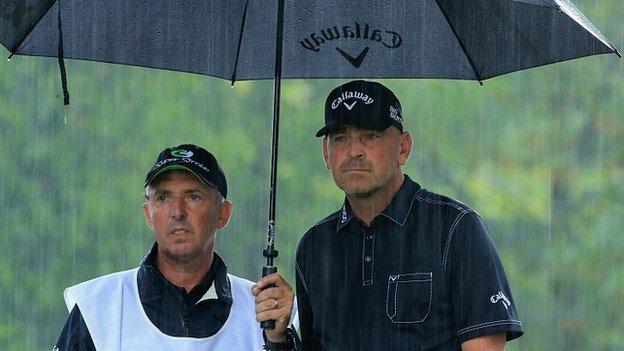 Thomas Bjorn fired a course-record 62 to set the pace in the first round of the BMW PGA Championship at Wentworth.

The Dane fired eight birdies and an eagle to finish 10 under to lead by two from Ireland's Shane Lowry.

Ian Poulter also carded 70 despite being a doubtful starter with a back injury, but world number seven Sergio Garcia pulled out with a knee problem after an opening 73.

The 43-year-old Bjorn matched the nine-under 62 of Robert Karlsson in 2010, but the Swede's score was set before the West Course's recent revamp when was par 71 not 72.

"You shoot great rounds in your career but to shoot 62 on this course, you can't ask for more," said Bjorn, a former Wentworth resident, who missed the cut in last week's Spanish Open.

"Last week was awful and I was starting to feel a little frustrated with things. Practice this week, I was not good either.

"To step out on this course of all courses and play like I did today was surprising. Although I lived here for nine years it's not a place where I think it's going to be a great week, but I have to stick my head down now and focus on the rest of the week."

The 15-time European Tour winner, who did not drop a stroke all day, reached the turn in 32 with birdies at the second, fourth and seventh.

"It was one of those days where you just walk off the golf course and you think, I want to keep playing," added Bjorn, who at third in the qualifying rankings looks set to make his first Ryder Cup appearance since 2002.

The Dane finished his round just before a torrential downpour forced play to be suspended because of a threat of lightning.

McIlroy was among those to finish in the early evening after two 45-minute weather delays, and he admitted finding it difficult to concentrate at times after revealing the end of his relationship with Danish tennis player Wozniacki on Wednesday.

"I just tried to bury my head in my golf and I did a pretty good job of it," he said after mixing eagles at the par-four seventh and par-five 12th with three birdies and three bogeys.

"I don't think you would be human if it wasn't tough, especially when it's a little slow out there and you are waiting between shots."

Defending champion Matteo Manassero carded an eight-over 80, while almost half the field have still to complete their first rounds.