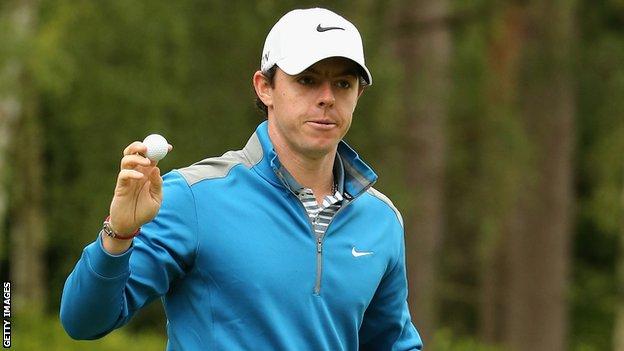 Rory McIlroy kept himself in contention at the PGA Championship as a second-round 71 left him sharing fifth place.

McIlroy suffered two bogeys and a double bogey early on but an eagle at the 12th and three birdies in his final four holes left him on five under.

That left him five behind joint leaders Thomas Bjorn and Ireland's Shane Lowry.

Michael Hoey missed the cut after a 76 left him three over with Darren Clarke [74] and Gareth Maybin [77] exiting on five over and 11 over at Wentworth.

In wet and windy conditions, McIlroy struggled on his front nine as bogeys at the second and third were followed by two more dropped shots at the seventh following a thinned bunker shot.

However, a second successive eagle at the 12th boosted McIlroy's morale and while he immediately bogeyed the next, the world number 10 finished strongly with birdies on 15, 16 and 18.

"I did not start off particularly well and made a mess of the seventh, but came back well and hit some quality shots on the back nine," said McIlroy, who revealed on Wednesday that he had ended his relationship with tennis star Caroline Wozniacki.

"Anything under par this morning was a decent score and to birdie three of the last four holes is pretty pleasing."

Amid the upheaval in his personal life, McIlroy went into the event acknowledging that he was expecting to struggle with his concentration but he again battled well on Friday after his opening 68 on Thursday.

"I was apprehensive going out yesterday, I honestly didn't know what to expect and it was good I had the quick turnaround to get back on the golf course.

"I have exceeded my expectations so far. Once you get inside the ropes you are concentrating on your golf and it's almost a nice four or five-hour release to concentrate on the job at hand."

Bjorn, after his brilliant opening 62, had a level par 72 while Offaly man Lowry gained two shots to join the Dane at the top of the leaderboard on 10 under.

After his opening 71, Hoey suffered a second successive missed cut as a 76 dropped him to three over after a round which included seven bogeys.

Clarke suffered an immediate double bogey to drop to five over but, helped by an eagle at the fourth, he had got back to three over at the turn but a bogey on 16 and double bogey on 17 ended his survival hopes.

Padraig Harrington survived to the weekend but dropped 11 shots off the pace after a 76 which included a double bogey at the first.

Simon Thornton battled impressively in the difficult conditions and carded a 68 to move to two under.

Damien McGrane survived into the weekend after a 75 left him on two over but European Ryder Cup captain Paul McGinley exited on five over after a 75.

Peter Lawrie (76) and Maybin (78) were certain to depart after finishing on seven over and 11 over while Ballyliffin club professional Damien Mooney's tournament was also over and his 76 left him on 11 over.