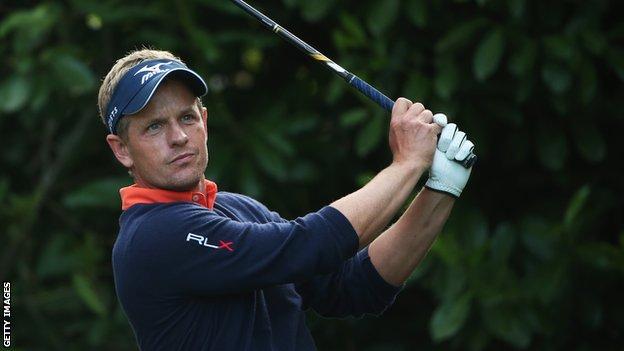 Luke Donald carded a second-round 67 to move into contention for a third BMW PGA Championship title in four years.

The former world number one fired six birdies and an eagle to end the day at Wentworth four shots behind joint leaders Thomas Bjorn and Shane Lowry.

Donald, 36, was joined on six under by Spain's Rafa Cabrera-Bello.

Sweden's Henrik Stenson and Northern Ireland's Rory McIlroy are in a group of four players a further shot behind on five under at the halfway point.

Donald admitted he was fortunate to get the best of the weather, after early rain and wind gave way to bright skies in the afternoon in Surrey.

The 2011 and 2012 champion had a run of five threes in succession from the eighth which culminated in an eagle on the 12th, and he finished his round with a birdie from 25 feet on the 18th.

"When we were warming up the rain was coming down pretty heavy and the wind was blowing hard," he said.

"It was wet for six or seven holes but for the rest of the day it was pretty nice. I'm happy with the way I played and I holed some long putts which is always a bonus.

"Being nine behind after the first day seems like a big mountain to climb but now I'm back in position to try to win this championship again."

Denmark's Bjorn, who set a new course record with his opening 62, recovered from two over par after seven holes on Friday to return a 72 and stay 10 under after two rounds.

"Those were tough conditions for everybody out there today - especially on the front nine, it was extremely difficult to get into a rhythm " Bjorn, 43, said.

"It was a tough ask today so I was pretty pleased with the way I finished the round."

Ireland's Lowry recovered from a double-bogey six on the ninth with birdies on the 10th, 12th, 17th and 18th.

Northern Ireland's Rory McIlroy came back from a 38 on the front nine to record a 71 to end the day on five under.

The former world number one eagled the 12th for the second day running and added birdies at three of the last four holes.