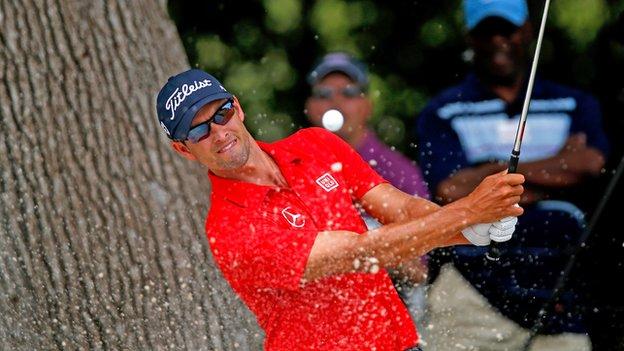 World number one Adam Scott recovered his form on the back nine to make the cut at the Crowne Plaza International at Fort Worth, Texas.

The Australian has now made the cut on 34 consecutive occasions, the longest active streak on the PGA Tour.

Brice Garnett of the United States leads the tournament on seven under at the halfway stage.

Scott, who was number two for 38 weeks, moved to the top on Monday with Tiger Woods sidelined with a back injury.

Scott at the top

Scott is only the second Australian to become world number one since the rankings started in 1983, and the 17th golfer in total.

Greg Norman became world number one in September 1986, and was the world's top golfer for 331 weeks in total.

Scott, the 2013 Masters champion, was in danger of missing the cut-off score of one over at Colonial Country Club when he bogeyed the par-four ninth hole, but recovered with birdies at 12, 13 and 18 and no dropped shots on the back nine.

The Australian's second-round 68 means he is one under for the tournament, six shots behind leader Garnett.

Scott would have relinquished top spot in he rankings after just one week if he had missed the cut and Sweden's Henrik Stenson had finished in the top 30 of the BMW PGA Championship.

Stenson is in joint fifth place at the halfway point at Wentworth after a second-round 71.