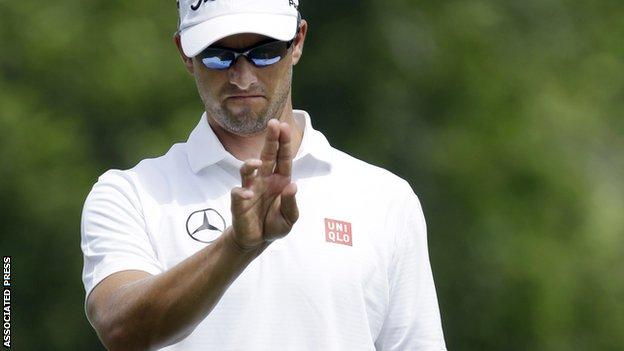 World number one Adam Scott produced a bogey-free third round 66 to move two shots off the lead at the Crowne Plaza Invitational in Texas.

The Australian, 33, is in danger of losing his place at the top of the official rankings after only a week.

Much will depend on how Henrik Stenson, 38, finishes at the BMW PGA Championship at Wentworth.

But four birdies helped Scott to five under overall going into the final round in Fort Worth on Sunday.

I'm happy to have got to number one. I hope it's not such a short stay

His performance on Saturday showed a steady return to form after a disastrous four bogeys on the opening day put him way off the pace.

When asked if the possibility of Stenson moving above him was a concern, Scott, who is tied 11th in Texas, told the PGA Tour website: "Worrying about that isn't going to help me at all.

"It's all very tight. We know that. I'm happy to have got to number one. I hope it's not such a short stay."

Four men are tied leading the way on seven-under overall heading into the final day.

Friday's leader, Brice Garnett, slipped to three under overall after a disappointing double bogey and two bogies saw the 30-year-old card 74 in the third round.