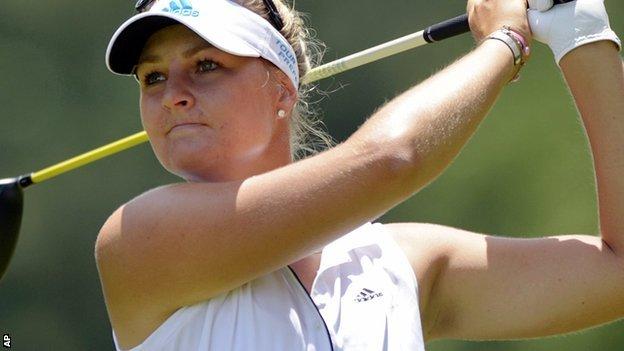 Anna Nordqvist moved a shot ahead of Scotland's Catriona Matthew in the third round of the Airbus LPGA Classic.

The Swede, 26, is 16-under-par after four successive birdies on the front nine, and six overall, helped her card 66 on Saturday.

By contrast Matthew, who led after the previous two rounds, struggled on the first nine holes at Mobile, Alabama.

A third round 66 kept American Stacy Lewis in contention, two shots behind Nordqvist in third.

Hull, 18, is one of three players a stroke further back. The 18-year-old had been second going into the third round, but finished on 71 for the day, with two birdies and a bogey, to sit three shots behind.

She is joined by Americans Michelle Wie and Jessica Korda after they carded 66 and 69 respectively.