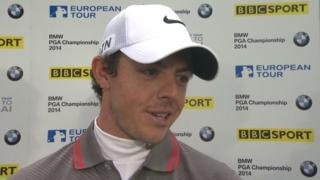 The 25-year-old, who announced on Wednesday he had split with fiancée Caroline Wozniacki, carded a six-under-par 66 at Wentworth to beat Shane Lowry by one shot.

McIlroy says he is delighted that "everything came together" as he claimed his first European Tour title since 2012.