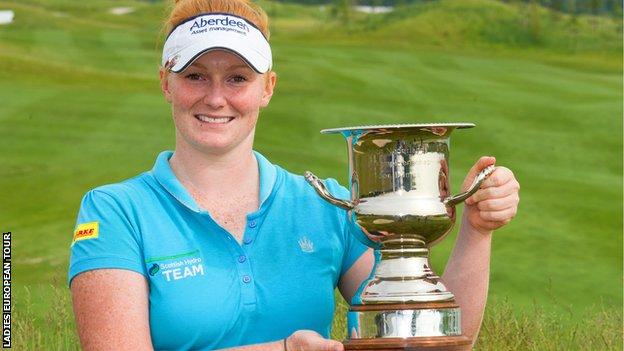 Scotland's Kylie Walker claimed her first Ladies European Tour win after a play-off for the Deloitte Ladies Open in Amsterdam.

The 27-year-old sank a 20-foot birdie putt on the second extra hole at The International to secure victory.

The Glaswegian had ended the three-round event level on six-under par with Nikki Campbell and Malene Jorgensen.

Walker, clubhouse leader overnight, said: "I've never been in a play-off to win, so it's a whole new experience."

With a previous best on the LET of fourth in the 2011 Prague Masters, Walker was ecstatic to seal her first win since she turned professional in 2010.

"When I holed the putt it was a relief and then with the crowd erupting it almost gave me a fright with all the fans going crazy," she added. "It was just brilliant, it was such a good feeling."