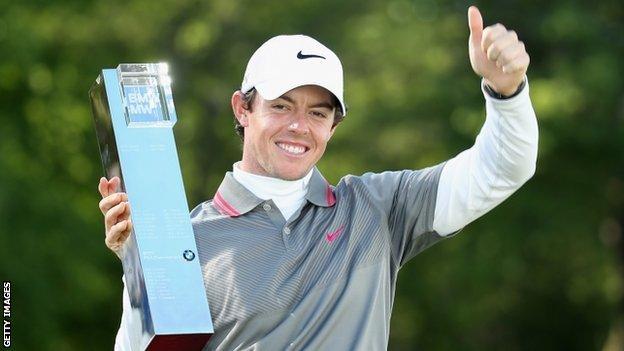 Rory McIlroy has risen to sixth in the world rankings after winning the PGA Championship at Wentworth.

The double-major winner, 25, came from seven shots behind 54-hole leader Thomas Bjorn to card a six-under-par 66 and beat Shane Lowry by one on Sunday.

The victory lifted the former world number one from Northern Ireland up four places in the rankings.

Australian Adam Scott, 33, retained his place as world number one by winning the Crowne Plaza Invitational.

McIlroy, who won the Australian Open last December, has targeted more major titles after his surprise victory at Wentworth. This latest win boosted his confidence ahead of the year's second major, the US Open, at Pinehurst from 12-15 June.

"I think the win in Australia stopped all the questions about equipment and about struggling and a slump and all this stuff," he said.

"I think this victory here, against one of the best fields of the year, sort of cements that and shows that I'm on the right track again. Hopefully it won't be long before I'm contending in majors and having a chance to win those again."

With 14-time major winner Tiger Woods absent through injury, McIlroy said earlier this season that golf was waiting for a "dominant player" to stamp authority on the game as Woods did in his prime.

Scott could argue he is that player after extending his stay as world number one just hours after McIlroy's win at Wentworth, but McIlroy hopes he can answer his own rallying cry.

"I hope so, I definitely hope so," McIlroy added. "I think it's the start of something. I could feel my game sort of bubbling and it was getting there. A win validates that.

"There's still three majors to play this year, a lot of golf left, a lot of big tournaments to try and win. So even though we're nearly halfway through the season, I feel like mine's just beginning."