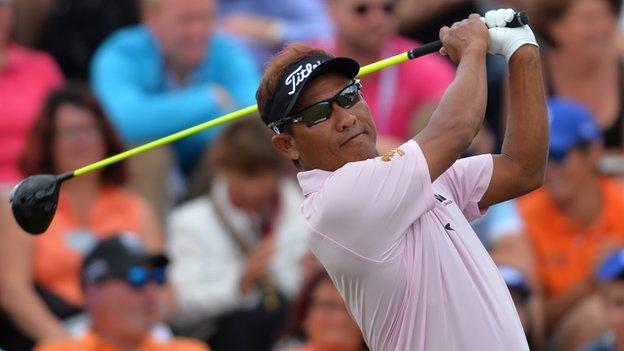 Stephen Gallacher was denied his second tournament win of the year as Thongchai Jaidee prevailed in a play-off at the Nordea Masters in Sweden.

For the fourth day running, the Scot birdied the 18th to finish in a three-way tie for the lead at 16 under par.

However, he could not repeat the trick at the same hole in the play-off while Thailand's Jaidee did following a final round of 65.

Victor Dubuisson shot a 67 to share second prize with Gallacher (68).

Frenchman Dubuisson could have avoided the extra hole with a birdie on the 18th, but three-putted from just off the green.

Gallacher, who won in Dubai in February, lost ground when he bogeyed the 17th from a greenside bunker but the 39-year-old converted from 20 feet at the next.

"I started with three birdies in a row, had another one on six, then a good comeback on 11."

Jaidee managed an eagle three on the 11th to go with six birdies and this win could propel him into the world's top 40 from his current position of 54 in the rankings.

Having waited for the last four groups to make their way down the the par five last, Jaidee knocked his third shot of the play-off hole to three feet and rolled in the putt after seeing Dubuisson and Gallacher miss lengthy birdie efforts.

Home favourite Henrik Stenson teed off in the final group but the world number two could only improve his score by one shot with a score of 71 and finished fifth.

Fellow Swede Robert Karlsson was a further stroke behind on 13 under par after carding a best-of-the-week 63.