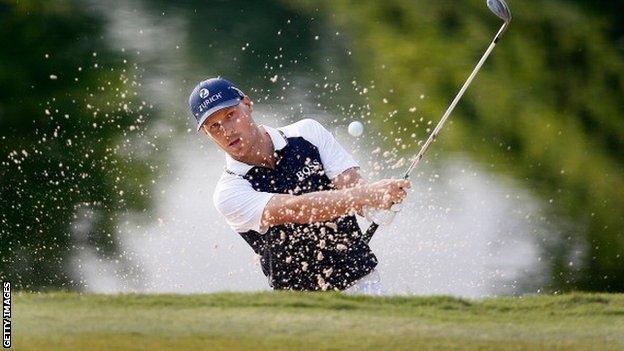 Ben Crane carded seven birdies to lead by two shots after a rain-affected first day of the St Jude Classic.

The American, 38, carded a bogey-free seven-under-par 63, with nearest challengers Peter Malnati and Billy Horschel on five under.

Horschel still has two holes to play after rain and lightning delayed play.

Phil Mickelson, runner-up last year, is ninth on three under, while Graeme McDowell and Ian Poulter are one under after 16 and 15 holes respectively.

Play was delayed for more than three hours during the afternoon, leaving 60 players, including McDowell, Horschel and Poulter, to resume their first round on Friday.

Crane, who has won four times on the PGA Tour but not since 2011, has managed just one top-10 finish this season.

"Whatever happens this week, I'm thrilled with this round and thrilled with the progress we've made," said Crane, whose season was cut short in 2013 because of a back problem.

Mickelson, who will attempt to complete a career Grand Slam at the US Open in Pinehurst next week, finished his first round strongly with four birdies from his last seven holes.

"I did exactly what I need to do and got some momentum that I need heading into the US Open," said the 43-year-old.