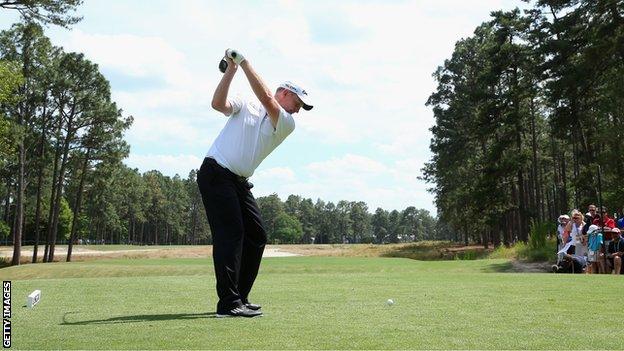 Stephen Gallacher heads into this week's US Open confident that he is on target to end the season on a high.

The 39-year-old Scot has targeted a place in Europe's Ryder Cup team and lies 12th in the points standings.

"I am where I want to be," he told BBC Scotland ahead of this week's major at Pinehurst, North Carolina.

"I had been trying to schedule it so I can peak at the big tournaments. I've got seven massive ones coming up and I feel fresh and ready to go."

Gallacher is also close to securing a US Tour card for next season.

"If I can have a decent week and secure that, it would maybe make my scheduling a bit easier for next year so I could the play the week before the majors and get the jet-lag over.

"There is quite a lot riding on the end of the season so I've just got to stay in the moment and not get too far ahead of myself."

Gallacher last played Pinehurst in 2005, but thinks the course is now "totally different" but hopes his experience of playing in this year's Masters and other majors last year will stand him in good stead.

"They have stripped back all the rough and made more run-offs and I think they've maybe lengthened it a bit as well," he said.

"It is different out there. The courses are set up differently and are a bit firmer than we play.

"The reason there are only four majors are because they are the toughest set-up and the toughest mentally and toughest physically.

"You would be in a rubber room if you had to play these every week, so it is about trying to get right for it."

Gallacher started the year by wining the Dubai Desert Classic and, most recently, finished fifth at the BMW PGA Championship then was runner-up after a play-off in the Nordea Masters in Sweden.

"The important thing after Dubai was to continue that and keep progressing," he added.

"I've had a good run of form recently and I'm exactly where I want to be coming into the summer."