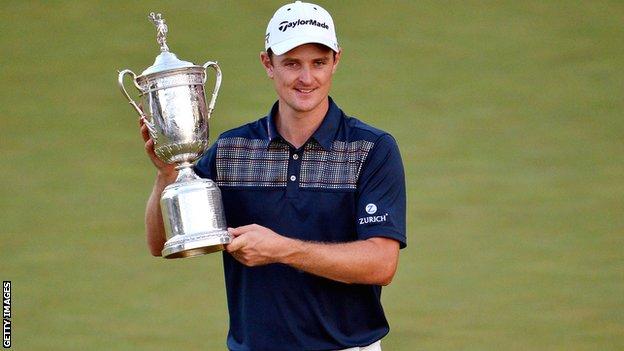 Justin Rose insists there is no extra pressure on him as defending champion at the US Open starting on Thursday.

The Englishman is bidding to become the first man since Curtis Strange in 1989 to successfully defend the title.

"I don't like that word 'defending' because it puts you behind the eight-ball," he said. "You don't want to be out there being defensive at all.

"I'm the only one guy who has the opportunity to repeat, but I'm seeing that as a pressure-free situation."

At Merion, Pennsylvania, 12 months ago, Rose captured his maiden major title when he became the first Englishman for 43 years to win the US Open.

His one-over total left him two shots clear of Phil Mickelson and Jason Day. It was the sixth time Mickelson has finished runner-up at the event, the one major the American left-hander has still to win to complete a career grand slam.

Rose will play alongside Mickelson this week as tournament tradition sees the holder placed in the same group as the Open champion and the holder of the US Amateur Championship - Englishman Matt Fitzpatrick - for the first two days.

"I enjoy playing golf with Phil," said Rose, the world number nine, whose group will begin from the 10th tee at Pinehurst on Thursday.

"I enjoy the spirit in which he plays the game, how free he is out there.

"He's got a great temperament for the game. Nothing seems to faze him. That's something a lot of players can look up to him for. It's hard to play that way and that has stood him in good stead throughout his career.

"I'm also looking forward to playing with Matt. I played 18 holes with him at Augusta this year and he's a really nice guy. He's got a great short game, too, so hopefully it will be a great group to be a part of."