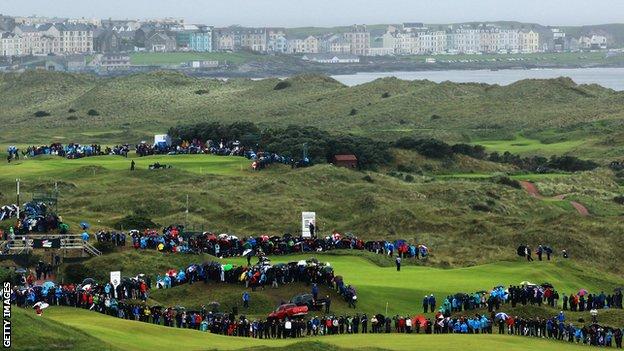 The Open Championship is to return to Northern Ireland for the first time since 1951, with Royal Portrush expected to host the tournament as early as 2019.

Major winners Rory McIlroy, Graeme McDowell and Darren Clarke have called for the Open to return to Portrush.

Max Faulkner won the Open on the County Antrim links 63 years ago.

That was the only Open Championship to be staged outside England and Scotland.

The Royal and Ancient said last month that it remained "some distance" from being able to stage the Open in Northern Ireland.

However, it is expected to confirm Portrush as an Open venue early next week following discussions with the club and Northern Ireland Executive.

It is understood that the 17th and 18th holes on the course may be moved in order to fulfil infrastructure requirements.

Clarke, who has been lobbying on behalf of Portush, won the Open in 2011 and is delighted that his home club will stage the tournament.

"It is wonderful for the area, for Northern Ireland and the whole of Ireland that one of the biggest sporting events in the world is coming here," said Clarke.

"It's just massive, with pictures of Royal Portrush being beamed around the world to people who haven't seen how beautiful it is."

Two-times major winner McIlroy said winning the Open at Portrush would be the pinnacle of his career.

"Irish golf has been on a great run and the ultimate is getting a major back here," added McIlroy.

"It's going to be incredible and I'm already looking forward to it.

"Everyone says winning the Open at St Andrews is a golfer's dream, but to win the event at home would probably be even bigger for me."

It was suggested that the R&A would hasten its decision to make Portrush an Open venue after the course emerged as a surprise contender to stage the US PGA Championship.