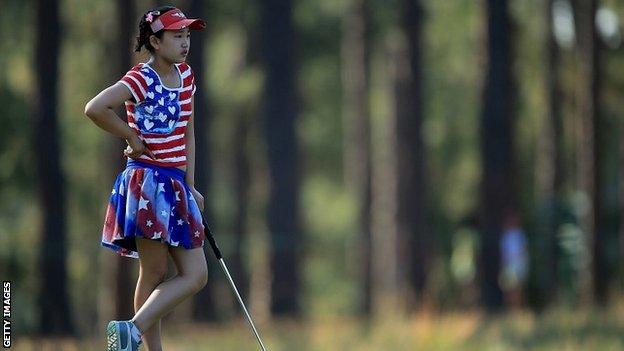 Eleven-year-old Lucy Li shot eight-over 78 as she became the youngest qualifier to compete at the US Women's Open.

The American amateur trailed leader Stacy Lewis by 11 shots after the first round at Pinehurst, the same venue that hosted last week's men's US Open.

World number one Lewis, who sank three birdies in her bogey-free 67, leads Michelle Wie (68) by one shot.

Northern Ireland-born Stephanie Meadow is level after 16 holes and one of 30 players unable to finish their round.

The 22-year-old birdied three of her opening six holes but bogeys on the fourth, 11th and 15th checked her progress.

Play was suspended just after 23:00 BST because of the threat of lightning and called off 30 minutes later.

Li, who won her qualifier by seven shots last month, beats the record held by fellow American Lexi Thompson, who qualified for the 2007 tournament aged 12.

She began with a double bogey on her opening hole, the 10th, and added another double and a triple bogey alongside three bogeys and two birdies.

"I kind of struggled, but it was great," Li said. "It's not bad, but I was seven over in three holes, so that's one over in 15 holes. So I just need to get rid of the big numbers."

Despite her tender years, Li is not the youngest ever player to compete at the tournament - that record is still held by Beverley Klass, who competed in 1967 aged 10 without having to qualify.

"She looks 11. She doesn't talk 11. And she doesn't hit the ball like she's 11," said American playing partner Catherine O'Donnell.

Australian Katherine Kirk, South Korea's So Yeon Ryu and Australian amateur Minjee Lee are tied for third on one under.

Scotland's 2009 Open champion Catriona Matthew shot 75 to finish alongside Amy Boulden of Wales on five over.

Defending champion Inbee Park of South Korea is a shot further back after a 76 that was matched by England's Jodie Ewart Shadoff, while her 50-year-old compatriot Dame Laura Davies took 82 for 12 over.

The Pinehurst No.2 course measured 6,296 yards - 1000 yards shorter than when Martin Kaymer won the men's US Open at the same venue last week.