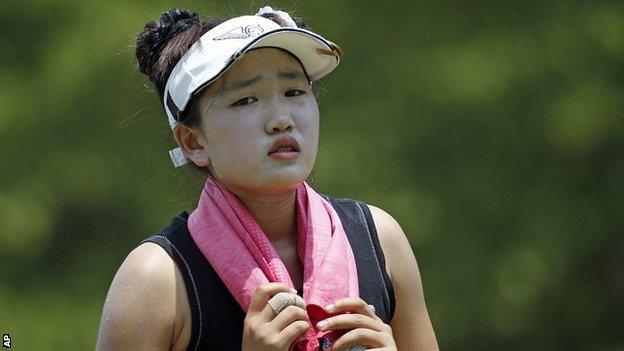 Eleven-year-old Lucy Li missed the cut with a second 78 as fellow American Michelle Wie led at the halfway stage of the US Women's Open.

Amateur Li, the youngest qualifier in US Open history, ended 16 over to miss out on the weekend by six shots.

Wie, 24, surged into a three-shot lead over compatriot Lexi Thompson with a second 68 at Pinehurst.

I'm trying not to focus on if I'm leading or not

Li, who beat the record for youngest qualifier held by the 12-year-old Thompson in 2007, carded a double bogey and a triple bogey alongside five other bogeys and two birdies.

"I'm really happy with how I bounced back from the big numbers," said Li, "It's been a great week.

"I did a good job staying patient and going to the next shot and not caring about what happens."

Beverley Klass is still the youngest to play in a US Open, competing in 1967 aged 10, although she did have to qualify.

Wie, who won the most recent of her three LPGA titles in April, finished ninth in her first major at the age of 13 before turning professional shortly before her 16th birthday in 2005.

The American, who played in a number of men's events earlier in her career, has yet to win a major but has finished in the top three five times, including second in April's Kraft Nabisco Championship in California.

Overnight leader Stacy Lewis, the world number one, carded a three-over 73 to slip back to level par alongside South Korea's Amy Yang and Australia's world number one amateur Minjee Lee, 18.

England's Jodie Ewart Shadoff ended seven over but Dame Laura Davies, 50, added a 74 to her opening 82 to finish 16 over alongside compatriot Rebecca Hudson.

The Pinehurst No 2 course measures 6,296 yards - 1,000 yards shorter than last week, when Germany's Martin Kaymer won the men's US Open at the same venue.