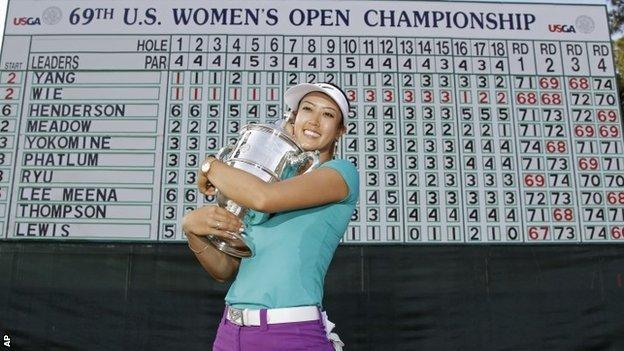 American Michelle Wie has won the US Women's Open at Pinehurst by two shots to claim her first major title.

Joint overnight leader Wie, 24, carded a level-par 70 to remain at two under and hold off world number one Stacy Lewis, whose 66 lifted her to second.

Northern Ireland's Stephanie Meadow, in her first professional tournament, hit a 69 to finish third on one over par.

"There were moments of doubt [during my career] but all the people around me never lost faith in me," said Wie.

"I had a lot of fun," Wie said. "I walked up 18 with goose bumps and kind of had the same putt as Martin [Kaymer had to win the men's US Open last week]. I didn't hit as hard as him though.

Wie burst on to the scene a decade ago by playing men's tournaments as a teenager. She failed to make a cut in her first seven tournaments but came back into form earlier this year with her first win in three seasons in April.

The Hawaiian's renewed confidence showed early in the final round at Pinehurst as she bounced back from an opening-hole bogey with eight pars, while South Korean Amy Yang, who had led overnight with Wie, gave in to the pressure of playing in the lead group and fell away with a 74.

Fantastic achievement and still only 24. Start of many I think now

Wie looked in control as she stepped on to the 16th tee with a three-shot lead but she drove into a bunker and then hit her second shot into a bush.

She had to take an unplayable lie penalty but eventually rolled in a five-foot putt to drop two shots as her lead slipped to one over Lewis, who had eight birdies and four bogeys in her round.

"When she hit that second shot on 16 I went over to the range because I knew she was going to be doing good to make bogey," said Lewis.

"I knew I had a chance but it was just great the way she came back and won it."

Wie responded with a superb 25-foot birdie putt at the par-three 17th and, with her swagger back, she drilled her final drive down the last to set up a closing par and the victory.

"I kind of smiled after I made my double-bogey putt," Wie said. "I just like to make it hard on myself."

Scotland's Catriona Matthew equalled Lewis' final-round best to finish tied-10th on five over par, though it was Meadow's stunning performance that most impressed of the contingent. from the home nations.

Meadow called upon advice from compatriot Rory McIlroy on how to play Pinehurst after he competed in the men's US Open on the course last week.