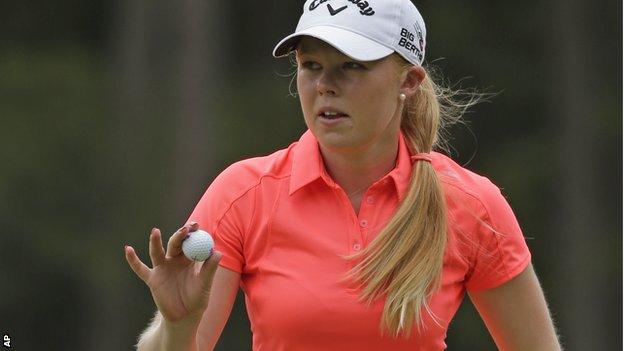 Northern Ireland's Stephanie Meadow says her superb third place the US Women's Open has made her more hungry to secure a major championship.

The 22-year-old Royal Portrush golfer was playing in her first tournament after turning professional.

Meadow finished three shots behind winner Michelle Wie and her prize money of more than $270,000 should be enough to secure her LPGA tour card.

"This whole experience is only going to make me work harder," said Meadow.

"I did not win - there are still people beating me and I am competitive, so I want to try and win majors some day.

To have enough confidence to keep going, I am proud of myself for doing that

"I am going to go back and work hard. If you are a competitive person, this is a driving force, you do well and you want more. So that is what I'm going to do."

Meadow, a former British Amateur champion, has been based in the United States since she was 14.

After opening with a one-over-par 71 on Thursday, Meadow had a 72 on Friday before Saturday's 69 moved her to within four strokes of leaders Wie and Korea's Amy Yang.

A closing 69 saw Meadow, who is originally from Jordanstown in County Antrim, finish one over par for the tournament.

Her performance at Pinehurst means a dramatic rise from 601st in the world to 95th.

"I always believed that I could do it," added Meadow. "The amount of hours I have put in for I don't know how many years. This is what I have been working for.

"To see all that pay off was really amazing. But to do it on my first week and to have enough confidence to keep going, I am proud of myself for doing that."