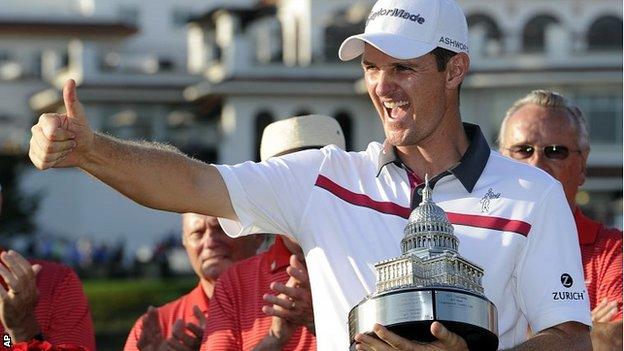 Rose, 33, won his sixth PGA Tour title and first since last year's US Open at the first extra hole, the 18th, where he found water in regulation play.

Stefani, ranked 246, was seeking his first PGA Tour win, but after tieing with Rose at four under, he caught the water in the play-off at Congressional.

The 32-year-old's consolation was to qualify for July's Open at Hoylake.

England's Rose, who trailed overnight leader Patrick Reed by three shots, led by one going down the last but drove into the trees and hit his second into the greenside pond.

The world number 10 found the putting surface in four and holed a 15ft putt for bogey to card a round of 70 for four under.

Stefani bogeyed 17 to slip out of a share of the lead but parred the last for another 70 to join Rose. He ended with a double bogey on the 73rd hole as Rose made a safe par to close out the win.

Americans Charley Hoffman and Ben Martin ended three under and also booked their spots at Royal Liverpool along with countryman Brendan Steele based on their top five finishes.

Reed slumped to a six-over-par 77 to end in a large group on level par, which also included Masters runner-up Jordan Spieth and Swede Freddie Jacobson.

A rain-soaked Congressional yielded a record-breaking US Open win for Rory McIlroy in 2011, and Rose suggested the course wanted to make amends.

"I think Congressional wanted its reputation back," said Rose. "It tested all of us getting to four under par to win this tournament.

"It's great to win on a course like this because you can't luck into it.

"I had to rely on different parts of my game all week. I was really pleased to see the PGA Tour set it up tough. It was fair but you had to play good strategic golf.

"It hasn't been lost on me that I haven't won for a year. It's a huge boost confidence-wise for sure going into a major championship."