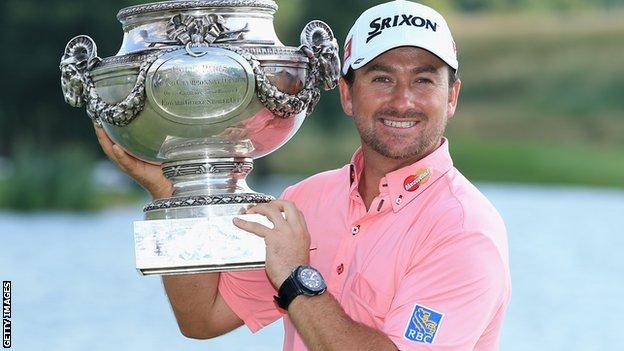 Graeme McDowell is in upbeat mood ahead of this week's defence of the French Open title in Paris.

The former US Open champion from Northern Ireland secured a top-10 finish at the Irish Open last week.

"It was really from the US Open onwards that I really felt like my game was ticking along nicely," said McDowell.

"I took positives away from the Irish Open - I hit the ball as well as I have this season tee-to-green and put myself in a position to win."

I felt like the last three or four years, come August, I've been pretty tired.

The Northern Ireland player will have to create a piece of personal history to retain the title at Le Golf National, venue for the 2018 Ryder Cup

McDowell has never successfully defended a tournament and all nine of his European Tour victories have come in different countries, namely Sweden, Italy, Korea, Scotland, Wales, the United States, Spain, Bulgaria and France.

He added: "Being the defending champion gives you a nice little buzz, a spring in your step and good memories and I'm looking forward to my pairing this week with Victor (Dubuisson) and the US Open Champion, Martin Kaymer, who is in some amazing form at the minute.

"I'm feeling good and ready for an exciting summer. I feel like I'm in a good space myself and looking forward to it. I had four or five nice days off last week, I've really made a sort of decision this year to pace myself for the summer.

"I felt like the last three or four years, come August, I've been pretty tired. I haven't been mentally and physically ready for the FedEx play-offs and into the early part of the autumn with the Ryder Cup.

"Even looking back to Medinah, I didn't feel like I was physically on top of my game that weekend and I really didn't play as well as I'd like to.

"It's really been a conscious decision since then to try and have myself in peak condition come July, August, September."