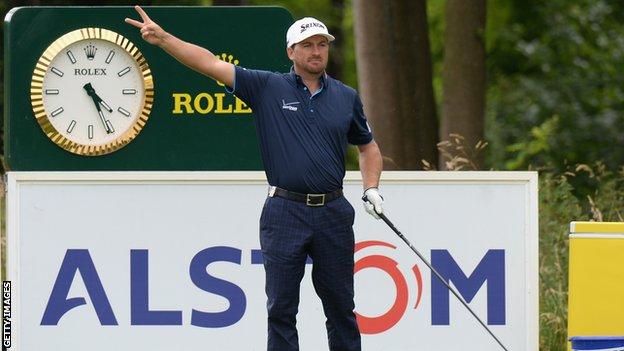 The Northern Ireland pair are among the players tied for eighth on one under.

Hoey moved into contention with three birdies but two double bogeys and a bogey thereafter saw him drop back.

McDowell carded two early bogeys but four birdies boosted his chances, before recording bogeys at the 10th and 13th and a double bogey at the 14th.

American Stadler fired a 72 to ensure that he takes a four-shot advantage into the final round at Le Golf National in Paris.

Thongchai Jaidee of Thailand and Frenchman Victor Riu are his nearest challengers on five under, the former shooting a 69 to aid his hopes of securing the title.

US Open champion Martin Kaymer is handily placed to take advantage of any slip-ups by the players ahead of him on three under.

Damien McGrane joins defending champion McDowell and Hoey on one under, while Ballyclare's Gareth Maybin is joint 39th on four over following a 76.

McDowell regrouped after the disappointment of dropping shots at the first and the fourth, registering four birdies in the space of five holes.

The Portrush man holed a 20-foot putt at the fifth and then had a stroke of luck at the next when his chip from the back of the green travelled at pace before hitting the pin and dropping into the hole.

A superb approach shot and tap-in at the seventh kept his hot streak going and the former US Open champion then holed from five feet on the ninth.

Poor drives saw him sign for bogeys at the 10th and 13th and this was followed by a double bogey seven at the 14th after he found the water.

"I was feeling really good about my game and felt I was swinging the club decently at times so I'm disappointed with my back nine," said McDowell.

"I'm only four or five shots off second place so all I can do is try to shoot a 66 or 67 to get into contention," he added.

Hoey's strong start saw him pick up shots at the second, sixth and 10th, but his challenge faded with double bogeys at the 11th and 15th and a bogey at the 13th.

Hoey and McGrane remain in strong contention however for one of the three places on offer for the Open Championship at Hoylake, should they finish in the top 10 on Sunday.