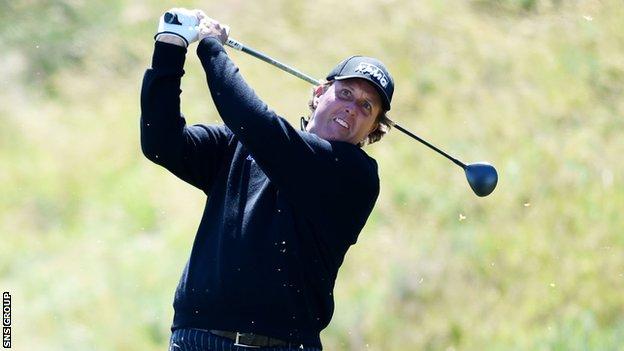 Phil Mickelson is drawing on happy memories and his passion for links golf as he prepares to defend the Scottish Open title at Royal Aberdeen.

The 44-year-old won at Castle Stuart last year before a dramatic Open triumph at Muirfield a week later.

"I really believe coming here and playing the week before the Open, playing in a great links test like this, is a real asset," he said.

"It's great to really get acclimated to these conditions."

The American star, a five-time major winner, is bidding to become the first man to successfully retain the Scottish Open as the tournament moves to a new venue.

After three years at Castle Stuart near Inverness, the event has relocated to the par-71 Royal Aberdeen, the world's sixth-oldest golf course.

"When you really appreciate and love links golf, like I've learned to, it's exciting," added Mickelson. "It turns out to be some of our favourite weeks of the year.

"I love these two events. They were two of the most memorable events of my career arguably last year. Having my family here, spending the two weeks here, and winning both events was something I'll always cherish."

Only two of the world's top 25 were in the field last year but the Scottish Open has regained its lustre, with the likes of Rory McIlroy, Justin Rose, Luke Donald, Lee Westwood, Jimmy Walker and Rickie Fowler making the trip.

McIlroy, who has not played in the event since 2009, has had mixed success in Europe this season, winning the PGA Championship at Wentworth but then missing the cut at his home Irish Open.

Rose, the 2013 US Open winner, ended a year-long drought with a victory at the Quicken Loans National a fortnight ago, his sixth PGA Tour title.

Donald won the Scottish Open in 2011 and will partner with Mickelson in the first two rounds this year.