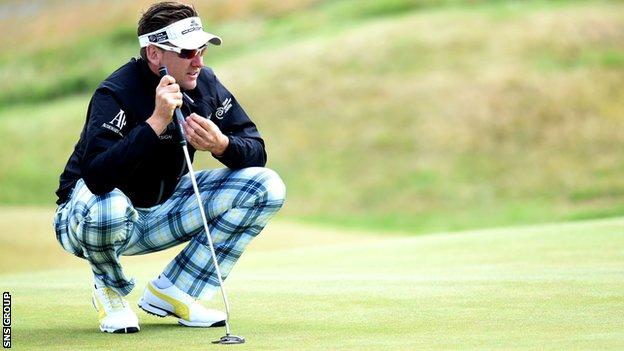 So much for Royal Aberdeen being gentle preparation for the Open championship next week.

Ian Poulter came off the course and admitted to feeling beaten by the wind - and, it seems, the wind is only going to get more blowy when the Scottish Open begins on Thursday.

Poulter spoke of the stern test that Royal Aberdeen provides and how some players - himself included - have become a little soft while cosseted for much of the year in sunshine in his home from home in Florida.

"We can go very soft," said the 38-year-old Englishman ranked 24 in the world. "We do get looked after and pampered quite nicely.

"I guess from time to time it's nice to be beaten up. It's a true test of golf. It's a hard test and it should be. It'll be draining.

"It's going to be a stern test with the weather. It seems there are three different winds on this golf course, so that will drain you mentally.

"We're not going to play one golf course, it looks like we're going to play three. It might even be more difficult than next week at Hoylake."

After his final day assault on the leaderboard at the Open at Muirfield last year, Poulter is searching for his best stuff following a slow beginning to the year.

The weather, he says, could be a major factor next week every bit as much as this week in Aberdeen.

"I don't know if it's culture shock," he said. "You know what you're going to get when you come over to play any Open.

"We've had a few nice-weathered one and we've had some really bad ones. Nobody likes to play in torrential rain and 35mph wind. But, yeah, we do get spoiled (in America) for the most part. We follow the sunshine around and if there's a storm 30 miles away we're in having a coffee with you boys in the press."

Poulter begins his opening round at Royal Aberdeen in the company of Miguel Angel Jimenez and the fast-emerging American star, Jimmy Walker.

He has defending champion Phil Mickelson in the group behind and Rory McIlroy in the group ahead in what is a stellar field.