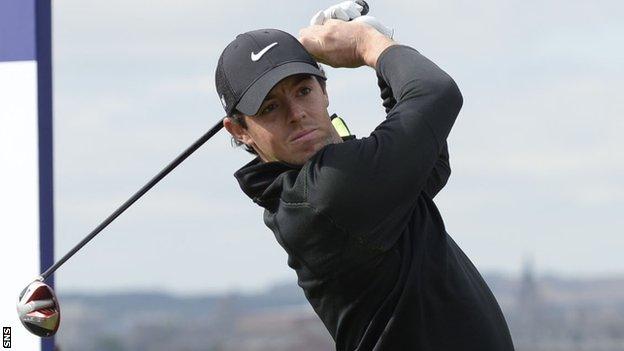 Rory McIlroy broke the course record to lead after the first round of the Scottish Open at Royal Aberdeen.

The Northern Irishman recorded eight birdies in an seven-under 64 to set the pace a week out from the Open.

McIlroy, who has not played in the event since 2009, has had mixed success in Europe this season, winning the PGA Championship at Wentworth but then missing the cut at his home Irish Open.

"Everything was pretty much on," said McIlroy, who is recently back from a "lads holiday" in Ibiza. "I controlled my ball flight really well which is the key to me playing well in these conditions and on these courses.

"I've been working the last 10 days on keeping the ball down, hitting easy shots and taking spin off it and I went out there today and really trusted what I practised."

"I'm driving the ball really well and I feel if I can get driver in my hand and have an advantage on the field I should do it.

"Going out this morning in these conditions I thought anything in the 60s would be a good score so to shoot something better than that is pleasing."

The 25-year-old took advantage of the 20mph wind and drove the green on the downhill 436-yard par-four 13th.

"I told Poulter it was a three-wood but it was a driver," said the world number eight. "He was on the green trying to flex his muscles."

Mickelson carded an eagle, two birdies and one bogey for a three-under-par 68 as he gears up to defend both this week and next week's Open Championship at Hoylake.

"The conditions were tough and I was surprised to see some of those low scores," said Mickelson. "But, I feel like I played well and had a good putting day until the last. It's a good first day.

"I think Royal Aberdeen is a great links test and a great way to get ready for the British Open, but so was Castle Stuart.

"I love that the Scottish Open is moving to these different courses to give a player like me a chance to see some great, great golf."

Lee Westwood finished on one-over 72 for the round.