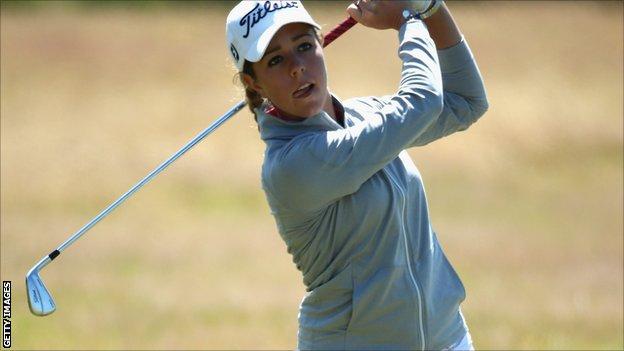 Teenager Georgia Hall says she is excited about the future after announcing she is to turn professional.

Bournemouth-based Hall had delayed turning pro due because of a combination of funding concerns and wanting to play in the Curtis Cup.

"It's very exciting. I've wanted to do this since I was seven," Hall told BBC Radio Solent.

"I'm finally going to turn pro soon, it means a lot and I cannot wait for the future."

Her career highlights so far include winning double gold at the 2013 Youth Olympic Festival and last year's British Amateur Championship.

Hall, who is now attached to Parkstone Golf Club in Dorset, is also a former European number one amateur and has been ranked as high as fourth in the world.

And after struggling to find sponsors, things are now looking up following her participation and performance at both the Curtis Cup and British Open.

"Things are looking a bit brighter," said Hall. "I stayed amateur to play in the Open and Curtis Cup really and I'm very happy I played in both of them. To play in the Curtis Cup was amazing with your team- mates and you can't get much bigger than a British Open.

"I wanted to play well in the Open. It was big for me, I got some TV coverage and that is one of the main part of getting sponsors, being recognised."

Hall is now hoping to be invited to play in a couple of professional tournaments before the end of the year, as well as attending Ladies European Tour school.

And she was delighted with her performance at Royal Birkdale, where she finished on nine-over par after a 74, a performance bettered only by Dame Laura Davies (+4) and Charley Hull (+5) amonf the British competitors.

"It was a good week, three out of four good rounds," she added. "It was a fun week, quite tiring, but you get more experience every time you play. You learn how to handle the pressure more."