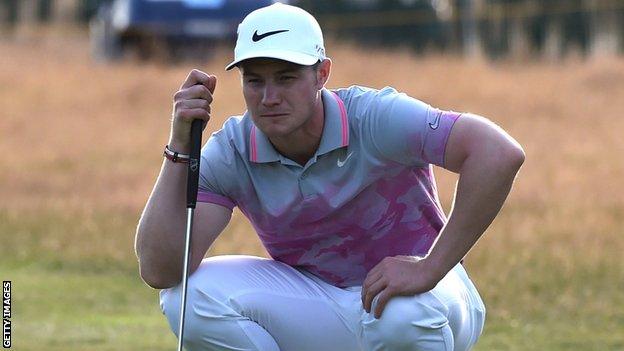 Essex's Ollie Fisher refused to let a double-bogey seven at the final hole ruffle him as he carded a level-par 72 on day one of the Open Championship.

Stood on the final tee at two-under, a birdie would have taken Fisher to within three of the overnight lead.

But, despite going out of bounds with his second shot, he remained upbeat.

"Level par's not the end of the world as I don't think it was that easy this afternoon. It firmed up a bit," Fisher told BBC Radio Essex.

"And it was a pretty positive day, apart from that double at the last.

"But it's a fair track. If you're in the fairways, the course is actually not that demanding."

Fisher backed up that statement by following a second-hole dropped shot with birdies at three, nine and 16, before that untidy end to his round in front of the massive horseshoe gallery at 18.

Fisher has been in a reasonable run of form of late, with three top 30 finishes on the European Tour prior to going to Royal Aberdeen last week.

And, having finished tied for 32nd on his second Open appearance at Muirfield a year ago, he is quietly confident of making an impression again this weekend.

"I'm playing OK," said the 25-year-old from Chigwell. "I've played pretty consistently all season, I feel at ease with my game, I know what I'm doing and I feel quite happy with my life right now. And I guess that shows a bit."

Not so happy, on his Open debut, was fellow Essex golfer Matt Southgate, who ran up an eight-over 80.

Southgate, 25, from Southend, was level par on the 12th tee after birdies at five and 10 to counter balance a double bogey six at the seventh.

But he then let eight shots slip in six holes, suffering a triple bogey seven on the 17th.