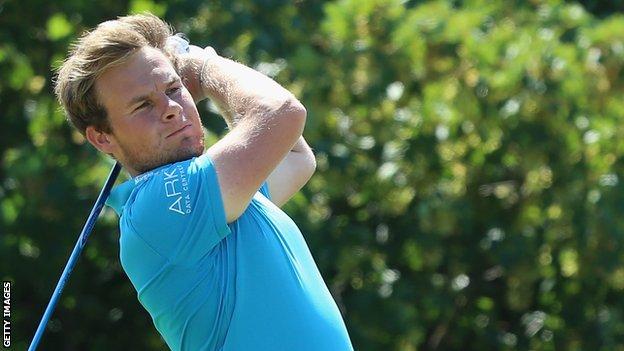 Buckinghamshire golfer Tyrrell Hatton felt he did not get lucky with The Open weather on the Wirral as he failed to find his best form at Hoylake.

The 22-year-old European Tour player from Marlow had work to do after a first-day three-over 75.

But bogeys at his first three holes steered his slump to a second-round 77 to exit on eight over.

"We teed off in quite dodgy weather. It was rainy and windy and I never really recovered," he told BBC Sport.

"It seems to be the story of my Open career, at all three I've been at, to be honest."

Hatton had high hopes for Hoylake after booking his place at Royal Liverpool with last weekend's fourth-placed finish at in the Scottish Open at Royal Aberdeen, but it did not go to plan.

He had an eventful first day, carding two birdies and four bogeys, but with one obvious high and one equally standout low.

The low was a triple-bogey eight at the fifth, but he did partially atone with an eagle at the last to sign for a 75.

In the second group out on day two, his early-morning start at 06:35 BST came in ugly conditions as the wind and rain arrived from the Irish Sea - and he started badly with three straight bogeys.

A birdie at the fifth was followed by further dropped shots at the seventh and the 11th, before two birdies in three holes at 12 and 14. But three more bogeys, at 15, 16 and 17 left him struggling to raise a smile.

"I actually putted quite well for two days and I'm still eight over, which says how badly I played," he said.

The consolation is that last weekend's big payday of 148,039 euros (£117,729) in Scotland - the biggest and best of two four-figure cheques he has banked this year - has left him in a comparative comfort zone for the rest of the year.

"It's certainly taken the pressure off," he said. "My tour card is now safe for next year.

"I'm just trying to focus on staying in the top 60 and getting in the Race to Dubai at the end of the season."