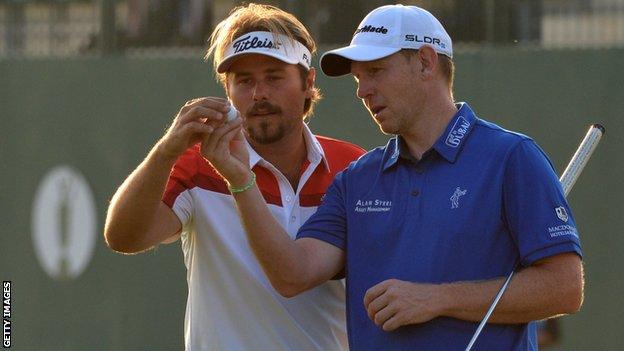 Marc Warren, Stephen Gallacher and Jamie McLeary made the cut at the Open Championship, as five other Scots bowed out at the midway stage.

Warren is five under par - seven shots behind tournament leader Rory McIlroy - with Gallacher two under and McLeary two over.

Warren is tied for ninth with Jim Furyk and George Coetzee while Gallacher is one of five players tied for 19th.

Ryder Cup hopeful Gallacher shot 70 on Thursday and picked up two more shots over his first five holes on Friday, only to give them away before the turn.

The 39-year-old from Linlithgow could only manage one birdie on the three par fives on the back nine, with his gain at the 16th making up for a dropped stroke at the previous hole.

Warren began the second round one behind his fellow Scot and was level par for the front nine, with two birdies and two bogeys.